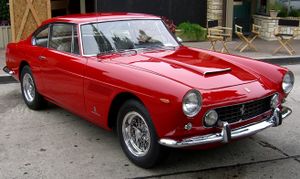 Nearly all 250s share the same engine: The Colombo Tipo 125 V12. At 3 L (2953 cc, 180 cu in), it is not a large engine even for the time, but its light weight and impressive output (up to 280 hp) made a big difference. The Ferrari V12 weighed hundreds of pounds less than its chief competitors — for example, it was nearly half the weight of the Jaguar XK straight-6.[1]

Typical of Ferrari, the Colombo V12 made its debut on the race track, with the racing 250s preceding the street cars by three years.

A predecessor to the 250 line was the 225 S introduced at the 1952 Giro di Sicilia. Two of the two-seat sports prototypes were built, an open barchetta and closed coupe both by Vignale. Seven 225 S cars were entered at the Mille Miglia, but these were overshadowed by their larger-engined 250 S brother. Although not as heralded as the 250 line, the 225 did play one unique historical role: A 225 S tested at Imola was the first Ferrari to drive on that course.

The first of the 250 line was the experimental 250 S berlinetta prototype entered in the 1952 Mille Miglia. The company's newest product was entrusted to Giovanni Bracco and Alfonso Rolfo and was severely tested by the Mercedes-Benz 300SL racers run by Rudolf Caracciola, Hermann Lang, and Karl Kling. The little 230 hp (171 kW) Ferrari was outgunned in the long straights but fought back in the hills and curves and Bracco emerged victorious at the end. This same car was later entered at the 24 Hours of Le Mans and the Carrera Panamericana.

The little 250 S used a 2250 mm (88.6 in) wheelbase with a "Tuboscocca" tubular trellis frame. Underneath were double wishbones at the front and a live axle located with double longitudinal semi-elliptic springs at the rear. Drum brakes and worm and sector steering were the norm. The dry-sump 3.0 L (2953 cc/180 in³) engine used three Weber 36DCF carburettors and was mated directly to a five-speed manual transmission.

Lauding the success of the 250 S at the Mille Miglia, Ferrari showed a more-conventional chassis for the new 250 engine at the 1952 Paris Motor Show. Pinin Farina clothed this chassis, with the celebratory 250 MM coupe launched at the 1953 Geneva Motor Show. This car was almost plain by contemporary standards, but it possessed a certain purposefulness with its small grille and compact tail complete with a panoramic rear window. Carrozzeria Vignale's open barchetta also broke new styling ground, with recessed headlights and side vents becoming a staple of Ferrari design for the 1950s.

Like the 250 S, the 250 MM was a racing car, debuting at the Giro di Sicilia with privateer Paulo Marzotto. A Carrozzeria Morelli-bodied 250 MM barchetta won the 1954 Mille Miglia with driver Clemente Biondetti, living up to its name. The V12-powered 250 MM was replaced by the four-cylinder 625 TF and 735 S later in 1953.

An unusual hybrid between the light four-cylinder 750 Monza and the 250 line was the 250 Monza of 1954. This model used the 250 engine in the short wheelbase chassis from the 750 Monza. The first two used the Pininfarina barchetta shape of the 750 Monza and a one-off 500 Mondial. Two more 250 Monzas were built by Carrozzeria Scaglietti, an early use of the now-familiar coachbuilder. Although a frequent entrant through 1956, the 250 Monzas failed to gain much success and the union of the Monza chassis and 250 engine was not pursued beyond this model.

The racing 250 Testa Rossa was one of the most successful Ferrari racing cars in its history, with three wins at Le Mans, four wins at Sebring, and two wins at Buenos Aires.

The 250 engine from the Testa Rossa was mounted in the midships position for the 250 P prototype racer of 1963.

The mid-engined 250 Le Mans looked every bit the prototype racer but was intended to be produced as a road-going GT. Descended from the 250 P, the Le Mans also appeared in 1963 and sported Pininfarina bodywork. Ferrari were unable to persuade the FIA that he would build the 100 examples required to homologate the car for GT racing. Eventually, 32 LMs were built[2] up to 1965. As a result, Ferrari withdrew from factory participation in the GT class of the 1965 World Sportscar Championship, allowing the Shelby Cobra team to dominate the class.

The 1953 250 Export and Europa were the only of the family to use a different engine. They shared the 2963 cc Lampredi V12 designed for Formula 1 use.

The 250 Europa, also introduced in Paris in 1953, looked entirely different. With the long 2800 mm (110.2 in) wheelbase and Ferrari America-style bodies, it was designed as more of a GT car than any previous 250. Both Pininfarina and Vignale handled the coachwork, with 21 produced in total.

The 250 design was extremely successful on the race course as well as the street. A number of GT models were built in varying states of road or racing trim.

The first street car to use Colombo's 250 V12 was the 250 Europa GT, introduced at the 1954 Paris Motor Show. Pinin Farina's sober Paris coupe was just one of many shapes for the 250 GT line, with coachbuilt production extending through 1956 before the 250 line became more of a standardized product. The original 250 Europa GT used a 2600 mm (102 in) wheelbase on a conventional chassis. The dry sump V12 was tuned to 220 hp (164 kW) with three Weber 36DCZ3 carburettors. Aping the Vignale's 250 Europa, Pinin Farina added now-familiar vents to the front fenders, a standard styling feature for many of the 250 GTs that followed.

Pinin Farina introduced a 250-based prototype at the 1956 Geneva Motor Show which came to be called the 250 GT Boano. Intended as a styling exercise and inspiration to 250 GT Europa customers, demand soon called for construction of a series of the car.

Unable to meet demand, Pinin Farina asked Mario Boano, formerly of Ghia, to handle the construction. When Fiat recruited Boano, he handed production duties of the Ferrari to his son-in-law Ezio Ellena. With partner Luciano Pollo, Carrozzeria Ellena would produce the Ferrari for another few years. Ellena revised the car, raising the roof and removing the vent windows from the doors.

All but one were coupes. The the single convertible, 0461 GT, was sold to New York collector, Bob Lee, off the stand at the 1956 New York Auto Show. At the direction of Enzo Ferrari, Lee bought the car for $9,500, far below cost. He still owns it, making it one of the oldest Ferraris still in the hands of the original purchaser.

Named for the 10-day Tour de France automobile race, not the famous bicycle race of the same name, a number of 250 GT "Tour de France" Berlinettas were sold for GT races from 1956 through 1959. There was actually 84 Tour de France's built. Construction was handled by Carrozzeria Scaglietti based on a Pinin Farina design. The engine began at 240 hp (178 kW) but rose to 260 hp (193 kW) by the end.

Released at Geneva in 1957, the original Pininfarina cabriolet used the 2600 mm (102.4 in) wheelbase and had distinct bodywork from the Berlinetta.

About 36 examples were produced before a second series was shown at Paris in 1959. These later cars had much more in common with the production Berlinetta.

About 200 of the series two cars were built.

Motor Trend Classic placed the 250 GT Series I Cabriolet and Coupe ninth on their list of the ten "Greatest Ferraris of all time".

Designed for export to America, the 1957 250 GT California Spider was Scaglietti's interpretation of an open-top 250 GT.

Aluminum was used in the hood, doors, and trunk lid, with steel specified elsewhere for most models, though a few aluminum-bodied racing versions were also built.

About 45 were made before it was replaced by the SWB version in 1960.

Desiring to enter series production in order to stabilize the company's finances, Enzo Ferrari asked Pininfarina to design a simple and classic 250 GT coupe. The resulting car was introduced at Milan in 1958, and 335 nearly-identical examples were built by 1960. Buyers included Prince Bertil of Sweden. The GT Coupe eschewed the fender vents for simple and clean lines and a notchback look with a panoramic rear window. The oval grille was replaced by a more traditional long narrow look with protruding headlights. Traditional telescoping shock absorbers were also fitted instead of the Houdailles found on previous 250s, and disc brakes were added in 1960. The final 250 GT Coupe had a Superfast tail and was shown at the 1961 London Motor Show.

In line with the high-volume coupe, Pinin Farina also designed a plainer 250 GT Cabriolet for series production. Introduced at the 1959 Paris Motor Show, the GT Spider sported a look similar to the GT Coupe of the previous year, including the removal of the side vents. About 212 were produced.

Development of the 250 GT SWB Berlinetta was handled by Giotto Bizzarrini, Carlo Chiti, and young Mauro Forghieri, the same team that later produced the 250 GTO. Disc brakes were a first in a Ferrari GT, and the combination of low weight, high power, and well-sorted suspension made it a competitive offering. It was unveiled at the Paris Motor Show in October and quickly began selling and racing. The SWB Berlinetta claimed GT class of the Constructor's Championship for Ferrari in 1961.

Replacing their LWB California Spider with a SWB version, Scaglietti showed a new Spider California at Geneva in 1960. Based on the 250 GT SWB, it also introduced disc brakes and a 280 hp (209 kW) version of the 250 V12. About 55 were built.

The LWB 250 GT theme was expanded with the 2+2 model 250 GT/E. The first large production four-seat Ferrari (earlier four seaters were made in very small numbers). Interior space was increased by moving the engine forward in the chassis. The rear seats were ideal for children but rather tight for adults.

Almost 1,000 GTEs were constructed by Pininfarina with prototypes starting in 1959 and continuing through three series until 1963. The model was followed by the visually similar 330 Americas.

A 250 GTE can be seen in The Wrong Arm of the Law, a film starring Peter Sellers.

Pinin Farina updated the 250 GT with the GT Lusso or GTL. Introduced at the 1962 Paris show, the car sported flowing lines and a fastback shape typical of the GT cars of the mid-1960s. Under the hood was the 250 GTO's Tipo 168 engine with 250 hp (186 kW) and three Weber 36DCS carburettors.

Scaglietti handled construction of the Lusso which lasted through 1964 with few modifications.

Rock star Eric Clapton owned one, and an example that had been owned by Steve McQueen was sold at auction for $2.3 million on 16 August, 2007. [11]

A 250 in all but name, the 1963 330 America shared the outgoing model's chassis if not its engine. Powered by the new 4.0 L engine of the later 330 cars, 50 330 Americas were built. Likely the most famous 330 America is that belonging to California socialite Sandra Ilene West. Mrs. West was buried at the wheel of her car following a 1977 drug overdose. Her instructions specified that she be clad in her lace nightgown with the driver’s seat "slanted at a comfortable angle". The car (and driver) is interred at the Alamo Masonic Cemetery, San Antonio, Texas. In the early 1990s (as reported in Classic Car magazine), a green-metallic 330 coupe was regularly abandoned, claimed and then re-abandoned in Melbourne over the course of 4 years. Its ultimate fate is not known.

Tractor manufacturer Ferruccio Lamborghini owned at least three Ferrari 250s: a 250GT coupe by Pininfarina, one or two 250 SWB Berlinettas by Scaglietti, and a 250GT 2+2 by Pininfarina. He was frustrated by frequent clutch problems and complained to Enzo Ferrari.[12] Ferrari insulted Lamborghini, who then resolved to build better GTs and sports cars than Ferrari. Lamborghini hired ex-Ferrari engineers to design and develop his Lamborghini cars.[13]