From Ferrari Wiki
Jump to navigation Jump to search
The printable version is no longer supported and may have rendering errors. Please update your browser bookmarks and please use the default browser print function instead.

The Ferrari 412T was the type name for the cars used by Ferrari in the 1994 and 1995 Formula One Season. It was designed by John Barnard and Gustav Brunner.

The Ferrari 412T1s during the 1994 season, driven here by Gerhard Berger (leading) and Jean Alesi.

The car was a simple and economical design powered by a 3.5 litre V12 engine, downsized to 3.0 for the 1995 season. The T stood for Transverse, as the gearbox was mounted in this way, improving rear-end weight distribution. The car featured heavily sculptured sidepods and a sleek rounded nosecone, aiding aerodynamics. The car was continually upgraded with redesigned sidepods and wings throughout both seasons. Initially a raised nose was used, to be replaced by a low-mounted nose after further development.

The car put Ferrari on the right track after several seasons of poor competitiveness in the early 1990s. Gerhard Berger and Jean Alesi proved the car's competitiveness throughout the two seasons, with a brace of podium places and four pole positions. Bad luck limited the number of wins to one each for both Berger (1994 German Grand Prix) and Alesi (1995 Canadian Grand Prix), particularly Alesi who was in a position to win at Monza and the Nürburgring in 1995, but the car was a solid and competitive proposition. 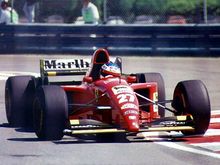 Jean Alesi in his only Grand Prix win at the 1995 Canadian Grand Prix in Montreal.

Both Alesi and Berger moved to Benetton for the 1996 season, and were replaced by Michael Schumacher and Eddie Irvine. Schumacher tested with the 412T and declared the car to be 'good enough to win a world championship.'