Gianni Morbidelli (born January 13, 1968 in Pesaro[1]) is a racing driver from Italy. He currently competes in the Speedcar Series. Morbidelli participated in 70 Formula One Grands Prix, debuting on March 11, 1990. He achieved one podium, and scored a total of 8.5 championship points.

Morbidelli was Italian Formula 3 and Formula 3 European Cup champion in 1989.

After doing the first 2 races of the 1990 F1 season for Dallara, Morbidelli concentrated on Formula 3000. He won 1 race and finished 5th in the 1990 championship. He also was the test driver for Ferrari that year [2].

Once the 1990 season had finished, Morbidelli did the final two races of the F1 season with Minardi, where he remained until the end of 1992, with the exception of the 1991 Australian Grand Prix, in which he was drafted in after Alain Prost left the Ferrari team. Morbidelli scored a half-point for 6th in a shortened wet race.

He joined Footwork for 1994 after a year away. He scored 8 points in two years with the team, including a 3rd place finish in the 1995 Australian Grand Prix, a race of high attrition. His points total made him the most successful driver in the history of the Footwork team.

A few mid-season races for Sauber in 1997 were unsuccessful and Gianni suffered two injuries through separate testing accidents. He never raced in Formula One afterwards. 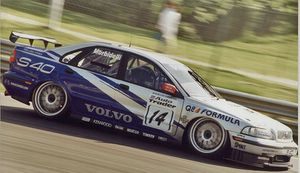 Morbidelli driving for Volvo in the 1998 British Touring Car Championship.

His touring car career seemed to be blighted by a lack of prowess in front-wheel drive machinery, as he had many competitive showings and race wins when racing rear-wheel drive BMW cars.