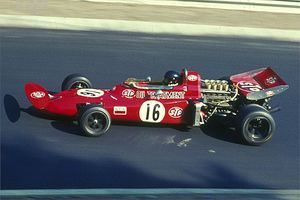 De Adamich driving for March in the 1971 German Grand Prix. 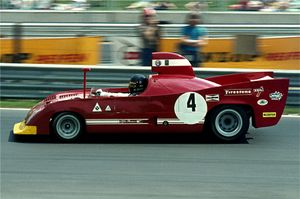 De Adamich was born in Trieste. He was an accomplished saloon and sport-car racer who performed solidly when asked to race in F1 where he was one of the few drivers to have worn spectacles to race.

He won the 1966 European Touring Car Championship at the start of a long relationship with Alfa Romeo and made his GP debut in the 1968 South African race when his Ferrari spun off on oil. Later in the season he won a South American F2 tournament with Ferrari but was not retained by the Italian giants and he returned to the Alfa Romeo fold as they entered F1 supplying engines to a third works McLaren. De Adamich only finished once in 1970 in the McLaren-Alfa and had no more luck the following year when the Alfa engine deal switched to March.

1972 saw De Adamich attract sponsorship to join the Surtees team and he finished a good 4th in the Spanish GP at Jarama and he repeated that placing the following year in the Belgian GP at Zolder in a sponsored Brabham.

1973 saw the end of De Adamich's GP career, mainly due to injuries sustained in a multiple pile-up at the British GP. He retired the following year and became a respected motor sport journalist and TV pundit in his native Italy (now he leads the TV sport program "Grand Prix" on Italia 1).

He is currently the vice-president of N. Technology which prepares race cars for Alfa Romeo.