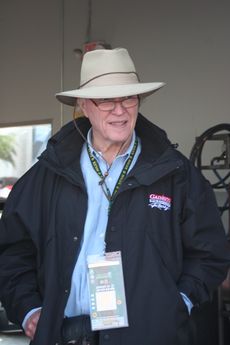 The son of a Metropolitan Opera star,[1] he was born in Port Jefferson, New York, but moved to California as a teenager. He has been a driver, a car manufacturer, and a team owner at racing's highest levels since 1958.

Gurney also won races in the Indy Car, NASCAR, Can-Am, and Trans-Am Series. Gurney is the first driver to win races in Formula One (1962), NASCAR (1963), and Indy Car (1967). The other two are Mario Andretti and Juan Pablo Montoya. In 1967, after winning the 24 hours of Le Mans together with A.J. Foyt, he spontaneously sprayed champagne while celebrating on the podium. Apart from starting this tradition, he also was the first to put a simple extension on the upper end of the rear wing. This device, called a Gurney flap, increases downforce and, if well designed, imposes only a relatively small increase in the drag.

Dan Gurney's father, John Gurney, was a prominent singer with the Metropolitan Opera in New York who retired in 1947 and moved the family to Riverside, California when Dan was a teenager. Young Dan quickly became caught up in the California hot rod culture. At age 19, he built and raced a car that went 138 miles per hour (mph) (222 kilometres per hour [km/h]) at the Bonneville Salt Flats. He then became an amateur drag racer and sports car racer. He served in the United States Army during the Korean War.[2]

After driving a Ferrari at Le Mans in 1958, Gurney was invited to take a test run in a works Ferrari, and his Formula One career began with the team in 1959. In just four races that first year, he earned two podium finishes, but the team's strict management style did not suit him. In 1960 he had six non-finishes in seven races behind the wheel of a privately-entered BRM. At one race, the Dutch Grand Prix at Zandvoort, a brake system failure on the poorly-prepared BRM caused the most serious accident of his career (and a longstanding distrust of engineers), killing a spectator. The accident caused him to make a change in his driving style that later paid dividends: his tendency to use his brakes more sparingly than his rivals meant that they lasted longer, especially in endurance races.

Gurney was particularly noted for an exceptionally fluid driving style. On rare occasions, as when his car fell behind with minor mechanical troubles and he felt he had nothing to lose, he would abandon his classic technique and adopt a more aggressive (and riskier) style. This circumstance produced what many observers consider the finest driving performance of his career, when a punctured tire put him nearly two laps down halfway through the 1967 Rex Mays 300 Indianapolis-car race at Riverside, California. He produced an inspired effort, made up the deficit and won the race (with a dramatic last-lap pass of runnerup Bobby Unser).

After rules changes came in effect in 1961, he teamed with Jo Bonnier for the first full season of the factory Porsche team, scoring three second places. After Porsche introduced a better car in 1962 with an 8 cylinder engine, Gurney broke through at the French Grand Prix at Rouen-Les-Essarts with his first World Championship victory - the only GP win for Porsche as an F1 constructor. One week later, he repeated the success in a non-Championship F1 race in front of Porsche's home crowd at Stuttgart's Solitude race track. Due to the high costs of racing in F1, Porsche did not continue after the 1962 season, though. While with Porsche, Gurney met a team public relations executive named Evi Butz, and they married several years later.

Gurney was the first driver hired by Jack Brabham to drive with him for the Brabham Racing Organisation. While Brabham himself scored the maiden victory for his car at the 1963 Solitude race, it was Gurney again who took the team's first win in a championship race, in 1964, again at Rouen. In all, he earned two wins (in 1964) and ten podiums (including five consecutive in 1965) for Brabham before leaving to start his own team. 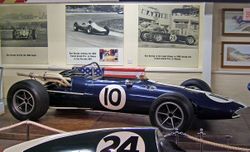 An Eagle T2G, the USAC variant of the first Eagle chassis. Almost identical to its Formula One sister model the T1G.

In 1962, Gurney and Carroll Shelby began dreaming of building an American racing car to compete with the best European makes. Shelby convinced Goodyear, who wanted to challenge Firestone's domination of American racing at the time, to sponsor the team, and Goodyear's president Victor Holt suggested the name, "All American Racers", and the team was formed in 1965. Gurney was not comfortable with the name at first, fearing it sounded somewhat jingoistic, but felt compelled to agree to his benefactor's suggestion.

Their initial focus was Indianapolis and Goodyear's battle with Firestone, but Gurney's first love was road racing, especially in Europe, and he wanted to win the Formula One World Championship while driving an American Grand Prix 'Eagle'. Partnered with British engine maker Weslake, the Formula One effort was called "Anglo American Racers." The Weslake V12 engine was not ready for the 1966 Grand Prix season, so the team used outdated four-cylinder 2.7-liter Coventry-Climax engines and made their first appearance in the second race of the year in Belgium. This was the race of the sudden torrential downpour captured in the feature film Grand Prix, and although Gurney completed the race in seventh place, he was judged too far back to be classified as a finisher. Gurney scored the team's first Championship points by finishing fifth in the French Grand Prix at Reims.

The next season, the team failed to finish any of the first three races, but on June 18, 1967, Gurney took a historic victory in the Belgian Grand Prix. Starting in the middle of the first row, Gurney initially followed Jim Clark's Lotus and the BRM of Jackie Stewart. A muffed start left Gurney deep in the field at the end of the first lap. Clark encountered problems on Lap 12 that dropped him down to ninth position. Having moved up to second spot, Gurney set the fastest lap of the race on Lap 19. Two laps later, he and his Eagle took the lead and came home over a minute ahead of Stewart.

This win came just a week after his surprise victory with A.J. Foyt at 24 hours of Le Mans, where Gurney spontaneously began the now-familiar winner's tradition of spraying champagne from the podium to celebrate the unexpected win against the other Ford GT40 teams. Gurney admitted later that he took great satisfaction in proving wrong the critics who predicted the two great drivers, normally rivals, would break their car in an effort to show each other up.

Unfortunately, the victory in Belgium was the high point for AAR as engine problems continued to plague the Eagle. Despite the antiquated engine tooling used by the Weslake factory (dating from World War I), failures rarely stemmed from the engine design itself, but more often from unreliable peripheral systems like fuel pumps, fuel injection and the oil delivery system. He led the 1967 German GP at the Nürburgring when a driveshaft failed two laps from the end with a 42-second lead in hand. After a third place finish in Canada that year, the car would finish only one more race. By the end of the 1968 season, Gurney was driving a McLaren-Ford. His last Formula One race was the 1970 British Grand Prix.

Among American drivers, his 86 Grand Prix starts ranks third, and his total of four GP wins is second only to Mario Andretti. Perhaps the greatest tribute to Gurney's driving ability, however, was paid by the father of Scottish World Champion Jim Clark when he took Gurney aside at his son's funeral in 1968 and told Gurney that he was the only driver Clark had ever feared on the track. (Horton, 1999).

While competing in Formula One, Gurney also raced each year in the Indianapolis 500 from 1962-1970. The last 3 years, he finished 2nd, 2nd, and 3rd, respectively. In 1969, he did not race in Formula One, instead racing in the USAC Championship Car series and also in CanAm. He started a total of 28 Champ Car races, winning 7 times among his 18 top tens. In 1969, he finished 4th in total points, despite starting half the races of most top drivers. In 1968, he finished 7th with only 5 starts.

Gurney's first career start was in 1962. Gurney was nearly unbeatable in a NASCAR Grand National car at the old Riverside International Raceway in Riverside, California. Four of his five victories came with the famed Wood Brothers. However, the 1967 race was won by Parnelli Jones, another open wheel and road racing driver making a one time appearance. Gurney's last start came in 1980. Gurney also made numerous appearances in NASCAR Grand American stockcars, a pony car division that existed between 1968 and 1971.

Gurney and his protege Swede Savage drove identical factory-sponsored Plymouth Barracudas in the 1970 Trans-Am Series. Upon his retirement from Formula One, Gurney devoted himself full-time to his role as car maker and team owner. He has been the sole owner, Chairman and CEO of All American Racers since 1970. The team won 78 races (including the Indianapolis 500, the 12 Hours of Sebring, and the 24 Hours of Daytona) and eight championships, while Gurney's Eagle race car customers also won three Indianapolis 500 races and three championships. In 1978, Gurney wrote an open memo to other race car owners with what is now known as the "White Letter" in which Gurney called for a series controlled more by the owners or "actual participants" than under the USAC banner. After much debate, CART was formed with Gurney and other owners like Roger Penske, Pat Patrick, and Bob Fletcher. CART began its first full season of competition in March, 1979 and thus the first split in open wheel racing began.

AAR withdrew from the CART series in 1986, but enjoyed tremendous success with Toyota in the IMSA GTP series, where in 1992 and 1993 Toyota Eagles won 17 consecutive races, back-to-back Drivers' and Manufacturers' Championships, and wins in the endurance classics of Daytona and Sebring. The team returned to CART as the factory Toyota team in 1996, but left again after the 1999 season when Goodyear withdrew from the series and Toyota ended their relationship with the team. In 2000, Dan campaigned a Toyota Atlantic car for his son, Alex Gurney under the AAR banner.