Derek Reginald Bell MBE (born October 31 1941 in Pinner, Middlesex) is a former racing driver from England who was extremely successful in sportscar racing, winning 5 times at Le Mans. He also raced in Formula One for the Ferrari, McLaren, Surtees and Tecno teams. 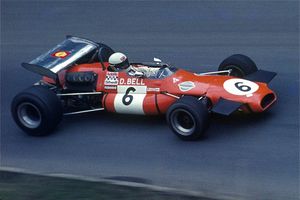 Derek Bell in the Wheatcroft Racing Brabham BT26 at the Nürburgring in 1970. 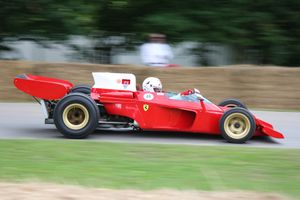 Bell demonstrating the Ferrari 312B3 "Spazzaneve" test car at the 2008 Goodwood Festival of Speed.

He grew up on a farm and helped to run a caravan site near Pagham Harbour before being encouraged by his stepfather Bernard Hender to take up racing in 1964 with Lotus Seven. He graduated to Formula 3 in the following year in a Lotus 31 and in 1966 switched to a Lotus 41 scoring his first victory at Goodwood. In 1967 he enjoyed seven wins. He entered Formula 2 in a privateer Brabham BT23C fielded by his stepfather's Church Farm Racing team and had several promising performances, which caught Ferrari's eye and made his Grand Prix debut at Monza. In 1969 he raced at Silverstone with Ferrari and also raced the four-wheel-drive McLaren M9A in its only race in the British Grand Prix.

Bell was one of many drivers to take part in the filming of Le Mans (1970) starring Steve McQueen. Bell had a lucky escape during the making of the film. The Ferrari 512 he was driving suddenly caught fire whilst getting into position for a take. He managed to get out of the car just before is was engulfed in flames and suffered minor burns. The car was badly damaged but later rebuilt.

Bell was also a runner in the 1970 European Formula 2 Championship driving a March. In 1972 he got the drive in the Tecno F1 team, along with Nanni Galli. He later raced a number of times for the Surtees team but also built a strong reputation as a fine sports car racer.

Bell was awarded the MBE in 1986 for services to motorsport.

Bell was hired as chairman for the failed Spectre R42 project between 1996 to its demise in 1997 and was hired to consult for the Bentley team in 2001, helping them to win Le Mans two years later. He now splits his time between the United States and Bognor Regis, and commentates on Formula One races which he has done for and drives in historic events, as well as performing an ambassadorial role for Porsche. Bell is currently an operating partner of Bentley Naples in Naples, Florida.

His son, Justin Bell is also a racer. The two raced together in the 1991 24 Hours of Daytona, and the 1992 24 Hours of Le Mans. Bell was to race in the 2008 Daytona 24 hours with Justin, however the car dropped out of the race early and Derek did not get to run in the race.