Edmund "Eddie" Irvine, Jr. (born 10 November 1965, Newtownards, County Down[1]) is a former racing driver from Northern Ireland. He grew up in Conlig, County Down, and was influenced by his parents, who were also involved in motor racing. His father, Edmund Sr., and his sister, Sonia (now a physiotherapist), worked with him during his career.[2]

His professional racing career began in 1983 and he progressed to Formula Three racing in 1988, before moving on to Formula 3000 in 1989. He got his break in the top of the Formula racing series after he started racing for Jordan in the Formula 3000 series in 1990, and was subsequently picked up by the Jordan Formula One team in 1993. His reputation steadily increased in Formula One, eventually leading Ferrari to sign him to partner Michael Schumacher in 1996.

1999 was his most successful season; Irvine won four races, taking the Drivers' Championship to the last race in which he finished third. In the overall Championship he finished as runner-up to McLaren driver Mika Häkkinen. He left Ferrari the following year for the new Jaguar Racing team and was the only driver to get Jaguar to the podium in their short F1 history; he achieved this feat twice. 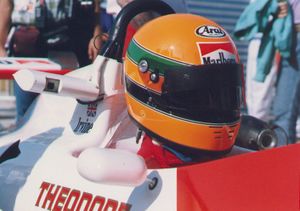 Eddie Irvine at the 1989 Macau Grand Prix. His helmet design was based on that of Ayrton Senna.

Eddie Irvine's racing career began in Formula Ford, and from 1983 through 1986 he spent the championships in middle-field places, finishing on the podium on some occasions. His big break came in 1987 when he signed for the works Van Diemen team and won both RAC and Esso FF1600 championships with a respectable 19 wins out of 36 races, including the prestigious Formula Ford Festival.

His performances in Formula Ford led to a signing in the front running WSR Formula Three team. During the season, it was clear that the Alfa Romeo Engine in Irvine's car did not have a chance of competing with the Toyota and VW powered cars. He finished the year fifth in the standings, without a single win, but with 8 podium positions.

After a good showing in the 1988 Macau Grand Prix, where he put his WSR Ralt car on the pole and won the first leg, Eddie signed for the Pacific team for the 1989 F3000 Championship. In a complicated season for a rookie team, Irvine finished the final standings in ninth place, ahead of his highly rated team mate JJ Lehto, who was already in F1 by mid-season. At the end of the year, Irvine returned to the Macau Grand Prix with his former team (WSR) in one of its Ralt F3 Cars.

For 1990 Irvine signed with Eddie Jordan for a second attempt at the F3000 Championship, this time winning the German round, and finishing the year third in the standings ahead of his team mates, Heinz-Harald Frentzen and Emanuele Naspetti. Again at the end of the season, Irvine stepped back to Formula Three to participate in the 1990 Macau and Fuji rounds, showing strong performance against F3 drivers and finishing on the podium in both events.

With no F1 in sight, Irvine headed for Japan, to compete in the Japanese Formula 3000 Championship. He finished seventh in the standings in 1991, eighth in 1992, and runner-up in 1993, just as he debuted with the Jordan F1 team at that year's Japanese Grand Prix.

In the early stages of his F1 career, Irvine was known as a fierce competitor. Even when he had a weaker car with which he only qualified for the rear of the grid, he had a tendency to "try to win a race at the start", often causing himself and others to exit a race in an untimely and untidy fashion. He was also noted for his personality, perhaps best described as anti-authoritarian. He finished 6th and secured a point on his debut Formula One race with Jordan in 1993 at Suzuka.

This race set the theme of controversy for Irvine that would follow him for the next couple of years. Seeing Ayrton Senna coming up behind him in his rear-view mirror, Irvine allowed him to pass. However, when Senna seemingly did not bother to lap Damon Hill who Irvine was racing against at the time, he felt he was being held up and, amazingly for a rookie against an all-time great, unlapped himself and immediately overtook Hill. [4] Incensed, Senna walked into the Jordan motorhome after the race finished and punched Irvine in the face.[5] Irvine spoke about this when asked about his most memorable moment:

Irvine continued with Jordan until 1995, where he was well matched with his younger, though more experienced team-mate, Rubens Barrichello. His lack of reliability as well as a tendency to get involved in accidents in 1994 meant that the final championship standings did not mirror his speed. Irvine recorded his first podium finish in F1 with a third place (behind Barrichello in 2nd) at the memorable 1995 Canadian Grand Prix.

Irvine's affinity for apparently reckless driving began to dissipate when he moved to the Ferrari team. F1 sports commentators even changed his nickname from "Irv the swerve" to "Steady Eddie" and "Fast Eddie". [7]

As the Formula One world became more technical and the driver personalities less distinctive, his non-conformist approach was generally appreciated. 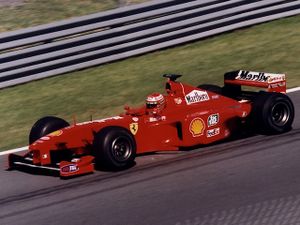 Irvine driving for Ferrari at the 1999 Canadian Grand Prix, during his most successful season in F1.

1999 saw Irvine's career reach a peak as, through a combination of circumstance and the culmination of his much improved and matured style and performance during his years at Ferrari, he found himself battling for the world championship following Michael Schumacher's accident at that year's British Grand Prix.

Irvine won the season's opening grand prix in Australia, in a race with significant attrition. With consistent points finishes and subsequent good form he was relatively well placed to take up the fight as the team's lead driver alongside Schumacher's replacement, Mika Salo. A controversial victory handed to him by Salo, out of sight of TV cameras, in the German Grand Prix at Hockenheim followed, although Irvine looked set to pass Salo with or without his help. Following the race, Irvine handed his victory trophy over to Salo as a gesture to show his gratitude.

A further win in Austria increased Irvine's title hopes. However, the normally flawless Ferrari pitcrew performed badly during his pitstops in two races, losing valuable points that left Irvine's championship lead smaller than it could have been. The returning Schumacher aided him in Malaysia, letting his team-mate past and then holding up title challenger, McLaren's Mika Häkkinen. Both Ferraris were disqualified hours after the race as a result of a minor aerodynamic irregularity concerning the cars' bargeboards, seemingly handing the title to Häkkinen, and the constructors' championship to the British team. However, the decision was later overturned and both cars reinstated in the race results, meaning that Irvine headed into the final round leading the 1999 Formula One World Drivers' Championship.

In the title showdown at Suzuka, a finish in front of Mika Häkkinen would guarantee Irvine the title. In the event, his third place finish behind Häkkinen and Schumacher handed the championship to the Finn. It is interesting to note, however, that under the current points system (10-8-6-5-4-3-2-1), Irvine would have won the championship. However, the 1999 season used a 10-6-4-3-2-1 scheme. 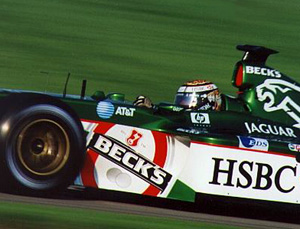 Notwithstanding his success in 1999, Irvine had become increasingly frustrated with a Ferrari team that had a team orders policy, meaning that he had to consistently take a backseat. He moved to Jaguar in 2000 to help establish the new team, where he finally became the lead driver.

The team learned much from Irvine's experience with Ferrari, but ultimately the Jaguar package was unreliable and uncompetitive. Driving a car much slower than most others, and dogged by the reliability problems, he still managed to get podium results at Monaco and Monza.

Friction in the Jaguar camp and his vocal frustration at the lack of positive development of the car resulted in his contract not being renewed. He was considered for a return to Jordan for the 2003 season but, due to that team's financial problems, he was left without a drive. He announced his retirement from Formula One racing that year.

Irvine is seen by many as a playboy in the mould of James Hunt, in contrast to the sport's modern stars, who are seen as staid and less flamboyant. Irvine is also remembered for his tendency to speak his mind, often to the irritation of some.

Eddie played himself in the 2004 comedy The Prince and Me, which starred Julia Stiles.

Following the collapse of talks with Minardi in 2005, Irvine is now considering setting up his own Formula One team from scratch.

He was a millionaire through property investment before reaching Formula One. Outside of F1, Irvine is said to have built up a multi-million pound property portfolio, owning around forty properties throughout the world. According to the Sunday Times Rich List, published in April 2006, Irvine was the fifth richest person of Northern Ireland at that time, having increased his personal fortune to approximately £160 million.

He is also the owner of Eddie Irvine Sports, a snooker, pool, kart racing, paintballing, and football facility in Bangor, close to his native Conlig.

He is now executive producer of a film being produced about Paddy Mayne.[8]

In May 2006, it was announced that Irvine would be one of the celebrities taking part in ITV's Soccer Aid. In aid of UNICEF, this television show featured an England vs the rest of the world football match, with teams made up of a mix of celebrities and ex-professionals. Unfortunately, he had to pull out because of a leg injury.

In late 2006 he launched a new television programme on the Sky One channel, with two teams of celebrity racing drivers competing against each other. David Coulthard was captain and coach of the girls team, and Irvine of the boys. Ultimately, despite some impressive performances by both teams, Irvine's team won by some margin. Also in 2006 Irvine had a brief fling with actress and model Pamela Anderson, who broke off the romance claiming that "Eddie was just too sweet for me."[9]

In 2002, Irvine successfully sued TalkSport Radio for "passing off" his image in a print advertisement, as if he had personally endorsed the station.[10]

By virtue of being born in Northern Ireland, a constituent country of the United Kingdom, Irvine was a British citizen throughout his career. He also held a racing license issued by the National Sporting Authority of the Republic of Ireland.[11] (Drivers are not compelled to obtain their license from their home country.) The FIA's International Sporting Regulations state that drivers competing in FIA World Championships shall compete under the nationality of their passport, rather than that of the National Sporting Authority that issued their racing license, as is the case in other racing series.[12]

This situation created some confusion as to Irvine's nationality when he appeared at podium ceremonies in the Formula One World Championship. At his first podium, a third place for Jordan at the 1995 Canadian Grand Prix, the British Union Jack was flown. However, at his third podium, a second place for Ferrari at the 1997 Argentine Grand Prix, an Irish Tricolour was mistakenly flown by the race organisers.[13] This led to his family receiving threatening phone calls. Irvine then requested that at subsequent races, a politically neutral shamrock flag be flown, and the non-sectarian Londonderry Air be played to mark a victory.[11] An FIA spokesman said:

Irvine has self-identified as being Irish: