Ferrari 312 is the name of several different Ferrari race cars which have 3 litre 12-cylinder engines. This article is about the Formula One car raced from 1966-1969. Other cars with the same number include the 312B, 312T F1 cars and the 312P and 312PB sportscars.

For the 1966 Formula One season, there was a change in the technical regulations, now allowing 3000 cm³ engines. The F1 teams, even though asking for "the return to power", were more or less surprised and not well prepared. 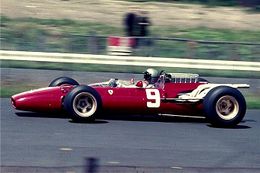 Ferrari's first 1966 car consisted of a 3.3-liter V12 engine that was taken from the Ferrari 275P2 sportscar prototypes, modified to 3000cc, and mounted in the back of an F1 chassis. The designation 312, which would be used for a number of later cars, indicated a 3 litre, 12 cylinder engine. The engine was rather heavy, and due to the reduced capacity, lower on power and especially torque. John Surtees drove this contraption unsuccessfully in Monaco while Lorenzo Bandini drove a Ferrari Dino 2.5-liter V6. Surtees won the second race, the 1966 Belgian Grand Prix, a track that favoured power with its long straights, but the '64 champion departed after a row with manager Eugenio Dragoni. The issue was about priorities in racing, as Ferrari was under pressure from Ford in sports car racing, and the F1 effort was somewhat neglected. Mike Parkes replaced Surtees, who went to Cooper which used Maserati engines, to finish second in the driver championship with a further win. For Ferrari, Ludovico Scarfiotti also won a race, the 1966 Italian Grand Prix at Monza which helped Ferrari finish second in the Constructors Championship.

In 1967, the team fired Dragoni and replaced him with Franco Lini. Chris Amon partnered Bandini to drive a somewhat improved version of the 1966 V12 car. At the 1967 Monaco Grand Prix, Bandini crashed and suffered heavy injuries when he was trapped under his burning car; several days later he succumbed to his injuries. Ferrari re-hired Mike Parkes, but Parkes suffered career-ending injuries weeks later at the 1967 Belgian Grand Prix. A fatal crash, another bad crash, no GP win and only 5th in the Constructors Championship marked a bad year for the Italians. In addition, the new Ford Cosworth engine that had its debut in the Lotus 49 would dominate F1 in the 15 years to come.

The 1968 season was little better. Young talent Jacky Ickx won the wet 1968 French Grand Prix with his driving skills, but had few other success. Things became more complicated during the season by the introduction of aerodynamic aids into F1, and their quick development. At the end of the season, the Scuderia was only 4th in the Constructors Championship, and there was also no success in sportscar racing as Ferrari did not take part at all in 1968. Manager Franco Lini quit, and Ickx also, moving to Brabham. To provide for the future, during the summer of 1968, Ferrari worked out a deal to sell his road car business to Fiat for $11 million; the transaction took place in early 1969, leaving 50% of the business still under the control of Ferrari himself.

During 1969 Enzo Ferrari set about wisely spending his newfound wealth to revive his struggling team; though Ferrari did compete in Formula One in 1969, it was something of a throwaway season while the team was restructured. Amon continued to drive an older model and Pedro Rodríguez took Ickx' place; at the end of the year Amon left the team that again had no GP win and was only ranked 5th in the Constructors Championship.

The car was succeeded by the 312B which was introduced for the 1970 Formula One season.

In 1998, a driveable, detailed virtual recreation of the 1967 Ferrari 312 appeared as one of the leading cars in Grand Prix Legends, a PC-based simulation of the 1967 F1 championship. The 1966 version was part of the free '66 Mod' for 'GPL', which was introduced in 2007. It included further refined driving physics.