The Ferrari 360 is a mid-engine two-seater sports car produced from late 1999 until 2005. The 360 replaced the Ferrari F355 and was itself replaced by the fairly similar Ferrari F430. For the 360, Ferrari partnered with Alcoa to produce an entirely new all-aluminum space-frame chassis that was 40% stiffer than the 355, yet 28% lighter despite a 10% increase in overall dimensions. Along with the new frame was a new Pininfarina body styling that broke ranks with the last decade's sharp angles and flip-up headlights, replacing them with a rounded appearance that harkened to the 1960s. The new V8 engine, common to all versions, was only slightly larger and more powerful than the 355's at 3.6 litres and 300 kW (400 bhp) of power, but the lighter frame and added stiffness improved performance; the 0 to 100 km/h acceleration performance improved from 4.6 to 4.4 seconds, and in the Challenge versions it was as low as 4.0 s. An engine replacement resulted in the current V8 road model, the F430 (internally referred to as the evoluzione or evo) which came out in 2004.

The Ferrari 360 Barchetta is a one-off wedding present from Ferrari to Ferrari's president.

The first model of the 360 to ship was the 360 Modena, named after the town of Modena, the birthplace of Enzo Ferrari. Its six-speed gearbox is available as a manual, or F1 electrohydraulic shift. The car went into production in 1999 and remained in production until 2005 when it was replaced by the F430. The Modena was followed by the 360 Spider, Ferrari's 20th road-going convertible. Other than weight, the Spider's specifications match those of the Modena almost exactly.

The 360 Challenge Stradale (or 360 CS) was a later addition to the road line. It was essentially a lightened version of the Modena, dropping 110 kilograms. Changes included larger 19" BBS wheels, the use of carbon fiber for the frames of the seats and mirrors, titanium springs which were also 20% stiffer, and Carbon fibre-reinforced Silicon Carbide (C/SiC) ceramic composite brake disks. A variety of option allowed for further weight reductions, including replacing the leather interior with fabric, removal of the power windows and mirrors, and leaving off the stereo. Lexan side windows were available in Europe only. It was officially introduced in March of 2003 at the Geneva International Motor Show and went into production shortly thereafter. The 360 CS can be compared to Porsche's GT3 RS model in design approach and many magazines have placed them head to head in road tests. Jeremy Clarkson compared the two and chose the 360 CS to be his favourite.

All models featured the same layout:

For Modena and Spider: 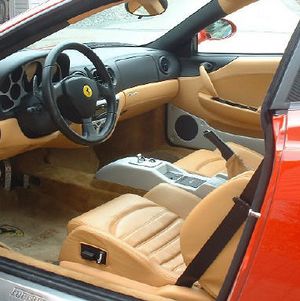 Interior of the Modena with the Rossa Corsa paint and tan leather. This example is equipped with the F1 gearbox, controlled by the "paddles" on the steering column 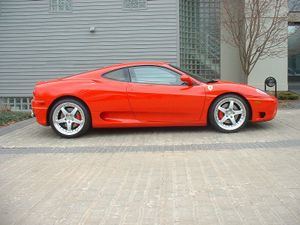 The 360 Spider is Ferrari's twentieth roadgoing convertible. The model was regarded a classic even when launched in 2000. Designer Pininfarinas lines are by many regarded as timelessly beautiful and yet sportingly aggressive.

The engineers worked hard from the start of the 360 project to lay the foundation for a Spider with exceptional torsional and flexional rigidity. They had to strengthen the sills, stiffen the front of the floorpan and redesign the windscreen frame. The rear bulkhead had to be stiffened to cut out engine noise from the cabin. The convertible's necessary dynamic rigidity is provided by additional side reinforcements and a cross brace in front of the engine. Passenger safety is ensured by a strengthened windscreen frame and roll bars.

The 360 Spider displays a curvilinear waistline. The fairings imply the start of a roof, and stable roll bars are embedded in these elevations. Due to use of light aluminium constructions throughout, the Spider weighs in with only 60 kg (130 lbs) more than the coupé.

With its hood up, the Ferrari 360 Spider looks extremely aggressive. Lowering the hood totally transforms the look. Seen from the side, the 360 Spider resembles a sports racer, a sensation underlined by the length of the rear engine bay, the twin roll bars, the rear fairings and the steep windscreen.

As with the Modena version, its 3.6 litre V8 with 400 bhp (300 kW) is on display under a glass hood. The engine - confined in space by the convertible's top's storage area - acquires additional air supply through especially large side grills. The intake manifolds, with the classical Ferrari covers, cuddle up to each other between the air supply conduits in the Spider engine compartment, as opposed to lying apart as with the Mondena.

Despite the car's mid-mounted V8 engine Ferrari's engineers found a way of creating a hood that automatically folds away inside the engine bay, thus ensuring purity of line. The top canopy of crease free material comes in black, blue, grey and beige. The striptease from a closed top to an open-air convertible is a two-stage folding-action that has been dubbed "a stunning 20 second mechanical symphony". After a short to and fro, the entire top disappears into a closed storage area between the seating and the engine.

The interior of the Spider is identical to the coupé.

The Challenge Stradale is a more track day focused car than the Modena, it was inspired by the challenge racing series and can be thought of as a Challenge car for the road. Ferrari engineers designed the car from the outset with 20% track day use in mind and 80% road use. With only a small 25 bhp (19 kW) improvement in engine power from the Modena but with substantially improved power to weight ratio, the Challenge Stradale accelerates from 0 to 100km/h (62mph) in just 4.1 seconds.

In total, the CS is up to 110 kg (243 lbs) lighter than the standard Modena if all the lightweight options are specified such as deleted radio, lexan side windows and fabric cloth (instead of the leather option). As much as 94 kilos (207 lbs) was taken off on the bodywork by stripping the interior carpets, lighter weight bumpers, carbon mirrors and the optional Modena carbon seats becoming standard. The engine and transmission weight was slimmed down 11kg (24 lbs) through the use of a smaller, lighter weight sports (yet still stainless steel) exhaust back box and valved exit pipes.

There are a lot of subtle (and some not so subtle) styling differences between the Challenge Stradale and the standard Modena.

The car also had the optional carbon racing seats (available in 3 sizes, small, medium and large) which are noticeable from the outside to complement the interior detailing

The Challenge was a track only car. It was a non-road legal variant of the Modena that shed 120 kg of weight by use of carbon fibre and stripping out of all of the road car's luxuries such as leather interior coverings, electric windows and mirrors. The car boasted a fully stripped out racing interior with full integrated welded in roll cage and fire extinguisher. Lightweight BBS 18" alloys, challenge rear grille and plexi-glass rear engine cover cosmetically distinguished the car from the standard 360. The Modena's advanced electronic suspension system with integrated ASR was dropped in favour of conventional racing Boge dampers. These changes lowered the car by an inch over the Modena while removing the electronic safety net of the road going car.

The engine performance was left the same as the Modena (at 400 bhp) with the focus on handling, weight reduction and weight balance improvements. The Challenge was only available in F1 automatic variant, no manual cars were produced. The biggest differences in driving were attributed to the weight reduction and massive handling improvements through the use of uprated stiffer springs and uprated aluminium suspension flamblocks (bushes).

Handling was described by some journalists as tricky on the limit, similar to its predecessor (the 355) while conflictingly others such as the well known Tiff Needell (from Channel Five's Fifth Gear) loved the handling. In Needell's review of the car he praised how well the car handled at the limit and how progressive the car behaved after driving the Ferrari on the track.

Much later on in the new format series of BBC's Top Gear TV program, the 360 was lambasted on various occasions, mostly for its propensity to spin when at the limit of traction. James May quipped jokingly, "Actually, this is why it's called the F360 [sic], this model. You drive along, come to a corner, and you go 'Fff...' as you do a 360!".