The Pininfarina designed original 456 was available in GT and (from 1996) GTA forms. The difference in name signifies the transmission: the former has a six-speed manual and the latter has a four-speed automatic developed in partnership with the UK firm Ricardo. This was only the fourth automatic transmission ever offered by Ferrari. 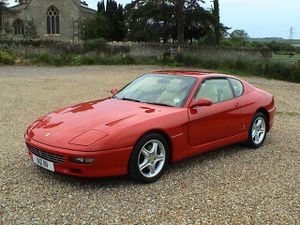 The name 456 is derived from the fact that each cylinder displaces 456 cc. It is essentially a detuned version of the engine that appears in the 550 and 575. Despite its supercar performance the 456 has a relatively unstressed engine, which has proven to be a very reliable unit.

The chassis is a tubular steel spaceframe construction with a one-piece composite bonnet and body panels of aluminium. The body panels are welded to the chassis by using a special "sandwich filler" called feran that, when laid between, allows steel and aluminium to be welded.

The Modificata 456 M appeared in 1998, starting with chassis number 109589. Many changes were made to improve aerodynamics and cooling, and the interior – still featuring Connolly Leather – was freshened with new seats and other conveniences (fewer gauges on dash, and a new Becker stereo fitted in front of gearstick rather than behind as in the very shallow and special Sony head unit in the 456 GT). Some readily apparent changes can be seen in the two adjoining pictures. The 456 has a smaller grille with fog lights outside the grille. The 456 also had hood-mounted air scoops which can be seen removed on the 456 M. The undercarriage spoiler on the 456 M is fixed, where the older 456 had a motorized spoiler that began its deployment above 105 km/h (65 mph). Power was up slightly on the Modificato now using Bosch Motronic 5.2 engine management at 442 hp (330 kW); with the firing pattern was changed for smoother running, and the torque remained the same for later versions of the 456 GT.

While the 456 fastback coupé was the only version to hit showrooms, three other rare body styles exist: