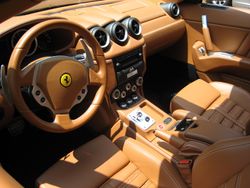 The Ferrari 612 Scaglietti (IPA: [skaʎˈʎetti] in Italian) is a grand tourer produced by Ferrari since 2004. It is a large two door fastback coupé. The 612 Scaglietti was designed to replace the smaller 456 M; its larger size makes it a true 4 seater with adequate space in the rear seats for adults.

It is produced at Ferrari's Carrozzeria Scaglietti plant, the former home of the car's namesake coachbuilder in Modena, Italy. The design, especially the large side scallops and the headlights, pays homage to the custom 1954 Ferrari 375 MM that director Roberto Rossellini had commissioned for his wife, Ingrid Bergman.

The 612 is Ferrari's second all-aluminium vehicle, the first being the 360 Modena. Its space frame (developed with Alcoa) is made from extrusions and castings of the material, and the aluminium body is welded on. The chassis of the 612 forms the basis of the 599 GTB.

On Top Gear, host Jeremy Clarkson drove a 612 Scaglietti in a race against co-hosts James May and Richard Hammond who took planes, trains, and buses - from the studio in Surrey, England to Verbier, Switzerland. Despite a mechanic leaning on and bending one of the windshield wipers (creating an irritating rattle) and being stopped for speeding, Clarkson beat May and Hammond to the resort lodge, passing the two a short distance from the lodge.

In his DVD Heaven and Hell, Clarkson also claims the car is the most "astonishing" made that year, despite the looks.