The Ferrari Challenge is a single-marque motorsport championship that was created in 1993 for owners of the 348 Berlinetta who wanted to become involved in racing. It now encompasses three official championships in the United States, Italy, and Europe.[1] Competitors from each series are brought together at the annual World Finals event. Currently, the Ferrari Challenge exclusively uses the Ferrari F430 model. 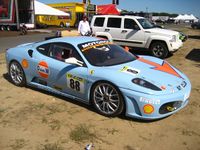 The two European championships each use the same two-class format in which distinguishes between professional competition drivers (in the Trofeo Pirelli class) and amateur "gentleman drivers" (in the Copa Shell class),[2] and the US series has just one class.[3] The Ferrari Challenge Italia was originally launched in 1993, with backing from Pirelli. Its popularity has resulted in a 2007 entry list of ten teams represented by 37 drivers.[4] It includes six events, plus the World Final, and shares some venues with the European series.[5] The US-based championship was inaugurated in 1994. It is organised by Ferrari North America and sanctioned by Grand Am.[6] In 2001, the number of championships peaked at five, with three in Europe, one in the United States, and one in Japan.[7]

The Ferrari Challenge has inspired other national club-level championships that are not directly affiliated with Ferrari itself. The Ferrari Scandinavia Challenge is an unofficial championship with events in Finland, Sweden, and Denmark. It was created in 2001 and is not exclusive to the latest Challenge cars.[8] The UK has a similar unofficial series comprising three championships for older cars that is organised by the Ferrari Owners' Club.[9] 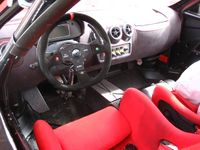 The cockpit of a F430 Challenge carries only basic racing necessities.

The Ferrari Challenge uses a single model from the manufacturer's road car range, suitably modified to make them safe for competition use. The lineage began with the 348 Berlinetta in 1993, followed by its successor, the F355 Berlinetta, and the 360 Modena was introduced in 2000. The F355 remained eligible during 2000 and 2001.[7] The 360CS (Challenge Stradale) version was the first competition-orientated version to be marketed to the public. The new F430 Challenge was phased in during a transitional year in 2006 and is now used exclusively.[10] The F430 introduced carbon-ceramic brake discs for the first time and gained 80bhp over the 360CS, which has reduced lap times to approximately three seconds shy of the F430 GT2.[2]