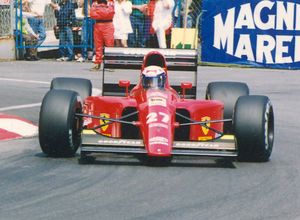 The Ferrari 642 is a Formula One racing car used by Scuderia Ferrari in the 1991 Formula One season. It was a development of the team's 641 chassis, which had mounted a championship challenge in 1990.

Ferrari started the 1991 season with high hopes of winning the championship. Jean Alesi signed a contract with the Scuderia when Nigel Mansell returned to the Williams team. The 642's best result was a second place taken by Alain Prost at the 1991 United States Grand Prix, held at the Phoenix street circuit. The 642 was replaced by the Ferrari F1 643 at the 1991 French Grand Prix.