The Ferrari F2001 was a highly successful Formula One car, designed by Ross Brawn and Rory Byrne for the 2001 Formula One season. 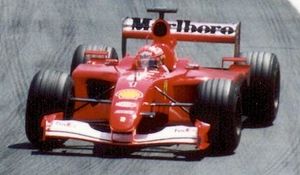 Michael Schumacher driving the F2001 at the 2001 Canadian Grand Prix.

The car was designed around new regulation changes which mandated a higher mounted front wing assembly to reduce downforce. This resulted in a distinctive 'droopsnoot' nose and spoon shaped front wing. That season also saw the re-introduction of traction and launch control systems, and the car and its suspension were designed with this in mind.

The car was something of a departure over previous Brawn/Byrne Ferrari designs, being more based on McLaren's design thinking. The car did feature Ferrari trademarks, such as the periscope exhausts pioneered by the team in 1998 and the small bargeboards which were a feature of its predecessors. The F2001 used the same basic gearbox and internal layout as its predecessors, however the aerodynamic efficiency and tyre wear were improved considerably over the F300, F399 and F1-2000 which had come before it.

The car proved easy to set up and was faster than the rival McLaren car, but the Williams although aerodynamically inferior was fitted with the massively powerful BMW engine, which was more than a match for the Ferrari power unit.

The season however proved easy for Michael Schumacher who took 9 victories and his fourth world championship, scoring a then record 123 points. He failed to finish only twice, but his team mate Rubens Barrichello had the lion's share of bad luck and should have taken wins himself but unreliability hindered him. Ferrari won its third straight constructor's championship.

The car was still competitive at the beginning of 2002 and Schumacher took the car's final win in the Australian Grand Prix before it was replaced by the all conquering F2002 from the third race.