The Ferrari F430 is a sports car produced by the Italian automaker Ferrari as a successor to the 360. It debuted at the 2004 Paris Motor Show.[1] European left-hand drive sales began in November 2004, but right-hand drive sales did not start until Spring 2005, and the North American market did not get the F430 until Summer 2005.

The F430's chassis is heavily based on its predecessor, the 360. Internally, both cars are referred to with the same model number (F131), though the F430 has the Evoluzione tag attached to show that it features some major changes. Internally, the car is simply known as the "Evo".[2]

The body has been redesigned to be more curvaceous and aerodynamic. Although the drag coefficient remains the same, downforce has been greatly enhanced. A great deal of Ferrari heritage is found in the car: at the rear, the Enzo's tail lights and interior vents have been added. The car's name has been etched into the Testarossa-styled driver's side mirror. The large oval openings in the front bumper are reminiscent of Ferrari racing models from the 60s, specifically the 156 "sharknose" Formula One car and 250 TR61 Le Mans cars of Phil Hill.

Along with a restyled body, the F430 features a 4.3 L V8 petrol engine derived from a shared Ferrari/Maserati design. This new powerplant is a significant departure for the F430's line: the engines of all previous V8 Ferraris were descendants of the Dino racing program of the 1950s. This fifty year development cycle comes to an end with the entirely new 4.3 L, the architecture of which is expected to replace the Dino-derived V12 in most other Ferrari cars. The engine's output specifications are: 360.4 kW (483 hp) at 8500 rpm and 465 N·m (343 lb·ft) of torque at 5250 rpm. The F430 will reach a top speed of 197 mph (317 km/h).

The brakes on the F430 were designed in close collaboration with Brembo[5]. The result has been a new cast-iron alloy for the discs. The new alloy includes molybdenum which has better heat dissipation performance. Another option Ferrari is providing are Carbon fibre-reinforced Silicon Carbide (C/SiC) ceramic composite discs. Ceramics have much higher resistance to heat and brake fade than metals, the F430's brakes offer not only good performance but also a longer lifespan. Ferrari claims the brakes will not fade even after 300-360 laps at their test track.

The F430 includes the E-Diff, a computer-controlled limited slip differential which can vary the distribution of torque based on inputs such as steering angle and lateral acceleration.[1]

The Ferrari F430 was also released with exclusive Goodyear Eagle F1 GSD3 EMT tires. "A car with such performance needs to be equipped with the best tires on the market," said Jean Jacques Wiroth, European director of Original Equipment Sales and Marketing for Goodyear tires, adding "we are proud that Ferrari chose the Goodyear Eagle F1 with run-flat technology." The Eagle F1 GSD3 has a striking V-shaped tread design and OneTRED technology.[6]

Car and Driver magazine found the car's performance worthy of the Ferrari heritage, and recorded a 3.5 sec 0-60 mph acceleration run in the F430[2] This makes it the third-quickest Ferrari road car ever made, following the Enzo and the 599 GTB. That being said, the 3.5 second 0-60 mph run was made on a European spec car, which has launch control, a feature designed to help launch the car from a standing start at high RPMs. Much like the E-Diff and the manettino, the launch control is a technology borrowed from Ferrari's Formula 1 racing program.[1] The launch control is unavailable in U.S.-spec F430s, presumably due to liability issues. The U.S.-spec F430 can do 0-60 mph in 3.6 seconds .

On the BBC Top Gear TV show, shown on the 17 July 2005, The Stig achieved a Power Lap time of 1:22.9. While the laptime was 0.89 seconds less than a Lamborghini Murciélago, the F430 was slower than the 360 Challenge Stradale at 1:22.3. The slower lap was blamed on the F430's Bridgestone tires supposedly having less grip than the Challenge Stradale's Pirellis.

Top Gear's Jeremy Clarkson has commented on the F430's handling being absolutely brilliant, a marked improvement over the 360; he claimed that the Ferrari holds the road so well that "even the most butter-fingered, incapable driver could drive the F430 around their test track only one second slower than the most skilled test driver". He has in fact proclaimed, on more than one occasion, that the Ferrari F430 is "just about the best car I've ever driven", a status he previously attributed to the F355 (but never the 360). 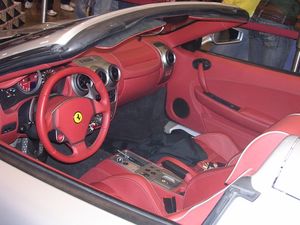 Despite the car's mid-mounted engine Ferrari's engineers found a way of creating a hood that automatically folds away inside the engine bay, thus ensuring purity of line. The striptease from a closed top to an open-air convertible is a two-stage folding-action that has been dubbed "a stunning 20 second mechanical symphony". After a short to and fro, the entire top disappears into a closed storage area between the seating and the engine.

The interior of the Spider is identical to that of the coupé.

The F430 Challenge is the racing version of the F430 for the Ferrari Challenge. The engine remains untouched but the vehicle's weight has been reduced and it can reach a top speed of 196 mph (315 km/h). The production model was unveiled at the Los Angeles Auto Show in January, 2005.

Built to replace the 360 GTC in 2006, the GT2 is a racing car designed to compete in international GT2 class competition, such as in the American Le Mans Series, Le Mans Series, and FIA GT Championship. F430 GT2s also compete at the 24 Hours of Le Mans. They are the fastest and most developed racing versions of the F430.

In FIA GT2 championship, in order to render the car performances more uniform, the cars are forced to run with a specific minimal weight and with an engine restrictor that depends on the engine displacement.[7] Hence the 4.3 L V8 engine in GT2 races is destroked to 4.0 L in order to compete in the 3.8-4.0 L class, which is allowed to race with a mimimum weight of 1100 kg (2425 lb).[7] Using the 4.3 L engine, the minimum weight of the F430 would increase by 50 kg (110 lb).[7] In this race configuration, the engine produces somewhat less power, but this is compensated by the lower car weight, which yields a better weight/power ratio.

Originally based on the F430 Challenge, the F430 GT3 is a specialized racing car designed for the FIA GT3 European Championship, but also used in other national GT championships. It is mechanically similar to the F430 Challenge, yet has some better developed aerodynamics, including large air exhaust vents in the hood.

Having a full 4.3 L engine the car is more powerful than the GT2 counterpart, however the GT3 rules require that the car has a weight/power ratio of about 2.6 kg/hp, hence the car has a minimium weight above 1200 kg (2646 lb) in race trim (driver and fuel excluded). Considering the less developed aerodynamics, and about 10% of extra weight, the car is clearly slower than the GT2 version; for example in the 2007 Spa 24h race, in which both models were entered, the GT3 spec vehicle was about 8 seconds slower in its best qualification lap times than the GT2 spec vehicle. 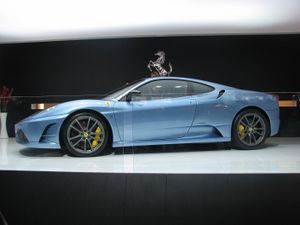 Serving as the successor onto the Challenge Stradale, the 430 Scuderia was unveiled by Michael Schumacher at the 2007 Frankfurt Auto Show. Aimed to compete with cars like the Porsche RS-models and the Lamborghini Gallardo Superleggera, meaning super light weight, it is lighter (by 100 kg/220 lb) and more powerful (515 PS (508 hp/379 kW) at 8500 rpm.) than the standard F430. Thus the weight-to-power ratio is reduced from 2.96 kg/hp to 2.5 kg/hp. In addition to the weight saving measures, the Scuderia semi-automatic transmission gains improved 'Superfast', known as 'Superfast2', software for faster 60 millisecond shift-times. A new traction control system combines the F1-Trac traction and stability control with the E-Diff electronic differential. The Ferrari 430 Scuderia does 0-60 miles per hour (97 km/h) in 3.1 s[9] and 0-100 km/h (62 mph) in less than 3.6 seconds,[10] with a top speed of 198 miles per hour (319 km/h).[10]

To commemorate Ferrari's victory in the Formula 1 Constructor's World Championship 2008, Ferrari unveiled Scuderia Spider 16M at World Finals in Mugello. It is a convertible version of F430 Scuderia.

While the F430 meets or exceeds all NHTSA guidelines, the car reportedly lacks sufficient protection for shorter passengers as well as children. The company requested an exemption from the airbag design requirements, which was eventually granted, allowing the car to continue to be sold in the US.[13]

The F430 has displayed a notable engine overheating problem in its early model years. This issue regards an engine-overheating flaw which has a tendency to cause a fire in the engine bay, usually leading to the destruction of the car.