The Ferrari P4/5 (officially known as the Ferrari P4/5 by Pininfarina) is a one-off Sports Car made by Italian sports car manufacturer Ferrari but redesigned by Pininfarina for film director and stock exchange magnate James Glickenhaus. The car was a Ferrari Enzo but the owner James Glickenhaus preferred the styling of Ferrari's 1960s race cars, the P Series.[1] The project cost Glickenhaus US$ 4 million and was officially presented to the public in August 2006 at the Pebble Beach Concours d'Elégance, but in July 2006 Glickenhaus allowed several websites to publish images of the clay model.[2][3][4]

In March 2005 James Glickenhaus, stock exchange magnate and known car collector, was approached by Pininfarina who asked if he was interested in commissioning a one-off car.[2] Andrea Pininfarina, grandson of the company’s founder later said "The Ferrari 612 Kappa and this P4/5 are the first. But we want to grow this business." indicating that Pininfarina is interested in producing other unique cars.[5] Glickenhaus replied that he would like a modern Ferrari P and in June of that year he signed a contract with Pininfarina to produce the car including the price, approximately US$4 million though in an interview he said "I feel they gave me more than I expected".[2][6] Glickenhaus purchased the last unsold Enzo Ferrari and upon receipt of the car he took it to Pininfarina to be redesigned similar to the 1967 Ferrari 330 P4 which he also delivered to Pininfarina.[1][5][7] Pininfarina's styling team leader, Ken Okuyama said that "Pininfarina wanted to stay away from retro design and move towards a more forward thinking supercar" as they were excited by the opportunity to build the car, not just design it.[1][4]

Its design began in September 2005 with sketches by Jason Castriota moving through computer aided sculpture and stringent wind tunnel testing.[4][5] More than 200 components were designed especially for the car though the engine, drivetrain and many other components are simply modified from the original Enzo Ferrari.[4] The Vehicle Identification Number (VIN) is unchanged from the Enzo from which it was derived.[5] The P4/5 was publicly revealed on August 18, 2006 at the Pebble Beach Concours d'Elégance and shown again at the Paris Motor Show in late September.[8]

Upon seeing P 4/5 Luca di Montezemolo felt that the car deserved to be officially badged as a Ferrari and along with Andrea Pininfarina and James Glickenhaus agreed that its official name would be "Ferrari P 4/5 by Pininfarina". Ted West wrote an article in "Car and Driver" about how this came to be: "The Beast of Turin".

The interior of the P4/5 was designed by Glickenhaus himself with an iPod nano stereo and a tablet PC which features not only GPS but a 3D model of the car as well as a complete parts list and manual for easy servicing. The P4/5 also sports improved air conditioning over the Enzo and a high-strength alloy roll bar redesigned because the original was too thick and obstructed Glickenhaus' view.[6][7] The seats are custom built, Glickenhaus' and his son's bodies were scanned so Pininfarina could mould the seats for their comfort, accessibility and view of the road (as with race cars). With a frame of carbon fibre composite, the seats are covered with a black mesh and red leather as selected by Glickenhaus' daughter.[2][6] Pininfarina rearranged the wiring of the Enzo so as to make the car easier to service and 270 kilograms (595 lb) lighter than the Enzo.[6][8]

The exterior of the car is made entirely of carbon fibre reinforced plastic and is similar in shape to the Ferrari 330 P4 as Glickenhaus requested, however it has been called a "rolling history of Ferrari-racing-DNA" sharing elements from several historic Ferrari vehicles, not just the 330 P4. The rear window is similar to that of the Ferrari 512S, the side vents are similar to the Ferrari 330 P3 and the nose is similar to that of the Ferrari 333 SP which improves cooling and the car's frontal crash safety.[6][5] The butterfly doors (similar to those of the McLaren F1) are designed such that even at 260 kilometres per hour (160 mph) there is no wind noise.[6] The improved aerodynamics have proven themselves, giving the car greater downforce at the same time as less drag than the Enzo also making the car more stable than the Enzo at high speeds.[6] 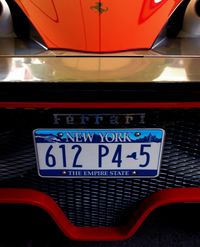