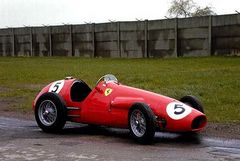 The Ferrari 500 was a Formula 2 car designed by Aurelio Lampredi. For 1952, the FIA announced that the World Championship would be run to Formula 2 specification after the withdrawal of Alfa Romeo from the sport.

Ferrari were the only team to have a car specifically designed for the new formula. The car was powered by a in line four cylinder engine which was mounted behind the front axle, improving weight distribution.

Alberto Ascari used the car to win his first world championship, winning all but one race with the simple 500. The race he missed was due to the fact he was driving the 4.5 litre Ferrari at the Indianapolis 500, but all was not lost as Ferrari won the race he was absent from as well. The following season, Ascari won his second world championship, and Ferrari won all but the final race, which was won by Juan Manuel Fangio, back in racing after an accident which had damaged his neck.

Ascari won 9 straight races in the 500, a world championship record which still stands today. The 500 won all but one race it was entered in, making it the most statistically successful car in the history of the FIA world championship.