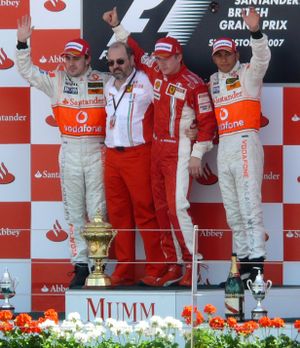 Simon (between Fernando Alonso and Kimi Räikkönen) on the podium of the 2007 British Grand Prix.

Gilles Simon is the French head of the Ferrari Formula One team's Engine Department.

Simon studied at the École des Mines, one of France's top engineering schools. He graduated in 1984 and joined the Renault team, where he worked in R&D for four years. He was then hired by Peugeot and worked on the marque's V10 engine, which would ultimately achieve success in their Le Mans effort in the early 1990s.

In 1993, Simon followed compatriot Jean Todt to Ferrari, assisting Paolo Martinelli in the Engine Department. Following the Italian's move to an executive role within Fiat, Simon took over as head of the department in October 2006.