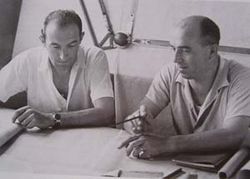 Colombo was born in Legnano. He began work as an apprentice to Vittorio Jano at Alfa Romeo. In 1937, Colombo designed the 158 engine for the Alfetta and caught the attention of Enzo Ferrari. After World War II, Ferrari asked Colombo to design a small V12 for use in the new Ferrari marque's racing and road cars.

Colombo's great work for Ferrari was a tiny 1.5 L V12, first used in the 166 sports cars. This engine, known in Ferrari circles as the "Colombo engine", was produced for road cars and endurance racing cars for more than 15 years in displacements up to 3.3 L. These included the famed 3.0 L Ferrari 250 racing, sports, and GT cars.

Colombo's engine was not as successful in Formula One racing. After stunning early success in the 166, the engine was supercharged for use in Formula 1 but failed to perform well. Ferrari hedged his bets, as he often did, by bringing on competing designer Aurelio Lampredi to create a large naturally-aspirated V12, which replaced Colombo's. Later, Colombo's former mentor, Vittorio Jano, came to Ferrari and displaced the work of both men.

Colombo left Ferrari in 1950 and returned to Alfa Romeo. Here, he oversaw the company's racing efforts, including the success that year of Nino Farina and, in 1951, Juan-Manuel Fangio.