The Scuderia Ferrari motor racing team has a long and successful history. 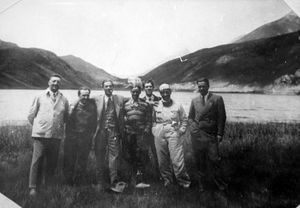 Scuderia Ferrari was founded by Enzo Ferrari in 1929 to enter amateur drivers in various races, though Ferrari himself had raced in CMN (Costruzioni Maccaniche Nazionali) and Alfa Romeo cars before that date. The idea came about on the night of November 16 at a dinner in Bologna, where Ferrari solicited financial help from textile heirs Augusto and Alfredo Caniato and wealthy amateur racer Mario Tadini. He then gathered a team which at its peak included over forty drivers, most of whom raced in various Alfa Romeo 8C cars; Ferrari himself continued racing, with moderate success, until the birth of his first son Dino in 1932. The well-known prancing horse blazon first appeared at the 1932 Spa 24 Hours in Belgium on a two-car team of Alfa Romeo 8C 2300 Spiders, which finished first and second.

In 1933 Alfa Romeo experienced economic difficulties, and withdrew its in-house team from racing. From then, the Scuderia Ferrari became the acting racing team of Alfa Romeo, when the factory released to the Scuderia the up-to-date Monoposto Tipo B racers. In 1935 Enzo Ferrari and Luigi Bazzi built the Alfa Romeo Bimotore, the first car to wear a Ferrari badge on the radiator cowl. Ferrari managed numerous established drivers (notably Tazio Nuvolari, Giuseppe Campari, Achille Varzi and Louis Chiron) and several talented rookies (such as Tadini, Guy Moll, Carlo Maria Pintacuda, and Antonio Brivio) from his headquarters in Viale Trento e Trieste, Modena, Italy, until 1938, at which point Alfa Romeo made him the manager of the factory racing division, Alfa Corse. Alfa Romeo had bought the shares of the Scuderia Ferrari in 1937 and transferred, from January 1, 1938, the official racing activity to Alfa Corse whose new buildings were being erected next to the Alfa factory at Portello (Milan). The Viale Trento e Trieste, Modena facilities then remained active for assistance to the racing customers. In October 1939 Enzo Ferrari left Alfa when the racing activity stopped; his company became Auto Avio Costruzioni Ferrari, which manufactured machine tools. The deal with Alfa included the condition that he not use the Ferrari name on cars for four years. In future years, SEFAC was used, for Scuderia Enzo Ferrari Automobili Corsa.

Despite his agreement with Alfa, Ferrari immediately began work a racecar of his own, the Tipo 815 (eight cylinders, 1.5 L displacement). The 815s, designed by Alberto Massimino, were thus the first true Ferrari cars, but after Alberto Ascari and the Marchese Lotario Rangoni Machiavelli di Modena drove them in the 1940 Mille Miglia, World War II put a temporary end to racing and the 815s saw no more competition. Ferrari continued to manufacture machine tools (specifically oleodynamic grinding machines); in 1943 he moved his headquarters to Maranello, where in 1944 it was promptly bombed.

Rules for a Grand Prix World Championship had been laid out before the war but it took several years afterward for the series to get going; meanwhile Ferrari rebuilt his works in Maranello and constructed the 12-cylinder, 1.5 L Tipo 125, which competed at several non-championship Grands Prix. The car made its debut in the 1948 Italian Grand Prix with Raymond Sommer, and achieved its first win at the minor Circuito di Garda with Giuseppe Farina.

Ferrari scored early successes in sportcars, taking wins in the 1950 and 1951 Mille Miglia, although the 1951 vistory resulted in a lengthy litigation when Ascari crashed through a barrier and killed a local doctor.

The 1970s were the last decade Ferrari entered as a works effort in sports car racing. After an uninspired performance in the 1973 F1 World Championship, Enzo Ferrari stopped all development of sports cars in prototype and GT racing at the end of the year, in order to concentrate on Formula One.