From Ferrari Wiki
Jump to navigation Jump to search
This article is about the racecar designer. For other people of the same name, see John Barnard (disambiguation). 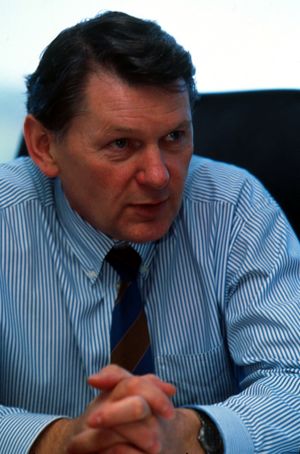 Widely regarded as one of the great technical innovators in Formula One, John Barnard is credited with the introduction of many new designs, including the semi-automatic gearbox and the first carbon fibre composite chassis.

Barnard gained a diploma from Watford College of Technology in the 1960s and unlike many of his contemporaries he did not follow a lengthy academic career, instead choosing to join GEC.

In 1968 Barnard was recruited by Lola in Huntingdon as a junior designer and began working on many of the chassis manufacturers projects, including Formula Vee racers and numerous sports cars. While at Lola John Barnard was introduced to Patrick Head, who would later go on to help found the Williams Formula One team. The two engineers became good friends and Head was best man at Barnard's wedding in the early 1970s.

In 1972 John Barnard joined the McLaren Formula One team and remained for three years working alongside Gordon Coppuck on the design of the Championship-winning M23 chassis and other McLaren projects, including the team's Indycar.

By 1975 Barnard had been hired by Parnelli Jones to work alongside Maurice Philippe designing the team's Formula One racer which campaigned from 1974 to 1976. After Philippe left Vel's Parnelli Jones Racing, Barnard modified the design for the Indycar circuit. Further Indycar designs followed and in 1980 the Barnard-designed Chaparral 2K chassis took Johnny Rutherford to the prestigious Indianapolis 500 and the CART drivers title.

His success in America brought Barnard to the attention of new McLaren team boss Ron Dennis, and in 1980 he joined the team and began working on the McLaren MP4 (MP4/1), the first Carbon-Fibre-Composite (CFC) chassis in Formula One, alongside the Lotus 91 designed by Colin Chapman. The chassis itself was built by Hercules Aerospace (U.S.A.) and quickly revolutionised car design in Formula One with new levels of rigidity and driver protection. Within months the design had been copied by many of McLaren's rivals. In 1983, Barnard pioneered the 'coke-bottle' shape of sidepods still visible to this day.

During his time with the team McLaren became the dominant force within Formula One, taking drivers titles in 1984, 1985 and 1986, with the first two seasons seeing constructors honours and the team narrowly missing out to Williams in 1986 for a third. By the time Barnard left McLaren for Ferrari at the end of 1987 his cars had won 31 Grands Prix for the team.

When Barnard joined Ferrari the team had won only two Grands Prix in the last two seasons and the designer had been able to name his terms. Given a large sum of money by the team to set up a design office in England, Barnard founded the Ferrari Guildford Technical Office and began work on returning Ferrari to regular winning. A lucky victory at the Italian Grand Prix in September 1988 followed in a season of total domination by McLaren, whose MP4/4 had been designed by his successor at the team, Gordon Murray.

In 1989 Barnard pioneered the electronic gear shift mechanism - now known as a semi-automatic gearbox - which was operated via two paddles on the steering wheel. This revolutionary system was considered far too fragile to race and expectations were suitably low, however, Englishman Nigel Mansell took victory first time out in Rio. John Barnard had instigated his second technical revolution, and by 1995 every team was running a copy of the Ferrari gearbox. Two more wins followed in 1989 and momentum now seemed to be on the team's side.

For 1990 Frenchman Alain Prost was signed in an effective swap, sending Ferrari favourite Gerhard Berger to McLaren. Everything now seemed to be in place, and Barnard’s 641/2 took Prost to five race victories, but once more both titles fell to McLaren and he opted to leave the Italian team and join Benetton.

John Barnard’s B191 took only a single race win in the hands of Nelson Piquet After completing the B192, in which Michael Schumacher would take his first Grand Prix win, John Barnard left Benetton after a dispute with team boss Flavio Briatore over money.

After working for a short time on the still-born Toyota F1 project, in mid-1993, Barnard returned to Ferrari, who were once more in a slump, having failed to win a single race since the designer's departure three years previously. Once more Barnard was able to name his terms and opened a new technical office in Surrey named Ferrari Design and Development (FDD). From his UK office Barnard began work on the 412T1B which ultimately returned Ferrari to the top of the podium at the hands of old team favourite Gerhard Berger.

Barnard continued to design Ferrari's Formula One racers for four seasons, including the 412T2; which took Jean Alesi to his only race win. By 1996 however major changes were underway at the Italian team. With Berger and Alesi removed, and reigning world champion Michael Schumacher installed as lead driver, team manager Jean Todt set about building a design office in Maranello. Unwilling to re-locate to Italy, Barnard's 1997 F310B was to be his last design when Todt appointed South African Rory Byrne as Chief Designer and Englishman Ross Brawn as Technical Director. In the summer of 1997 FDD was purchased from Ferrari and became B3 Technologies ending Barnard’s association with Ferrari. Although no longer part of the team, the designer's F310B chassis took Michael Schumacher tantalisingly close to the title and his victory at the Japanese Grand Prix was to be the last for a Barnard car.

In 1998 B3 Technologies began working for the Arrows Formula One team, but the deal soon descended into dispute when the Prost team also subcontracted the R&D outfit. Ultimately, John Barnard worked as a technical consultant for the Prost team until its demise in 2001 when he chose to move into motorcycle racing, becoming Technical Director of the Team KR Moto GP team. On February 29 2008, John Barnard sold his company, B3 Technologies to 3 people, one of whom had previously worked for him, and moved into furniture design with leading designer Terence Woodgate. As an aside, as of 17th December 2008 B3 Technologies has been put into administration.