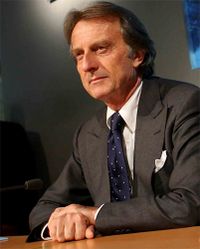 Luca Cordero di Montezemolo (born August 31, 1947) is an Italian businessman with an estimated net worth of 400 million dollars, president of Ferrari and chairman of FIAT; he was also president of Italian Confindustria from 2004 to 2008 and of FIEG. He comes from an old aristocratic family of Piedmont, and is related to Andrea Cordero Lanza di Montezemolo, who became a cardinal in 2006.

Born in Bologna,di Montezemolo drove briefly for the famous and privately owned Lancia rally team known as HF Squadra Corse. He joined the auto manufacturing giant and conglomerate FIAT S.p.A. which is headquartered in Torino, Italy. However in 1973 FIAT moved him to Ferrari, where he promptly became Enzo Ferrari's assistant and, in 1974, manager of the Scuderia. In 1975, di Montezemolo was promoted out of Ferrari to be head of all FIAT racing activities, and in 1977 he advanced to become a senior manager of FIAT.

Throughout the 1980s, di Montezemolo occupied a number of positions in the huge FIAT empire, including managing director of the Cinzano drinks company and director of the Itedi publishing company. In 1982 he managed the entry of the Azzurra yacht in the America's Cup, the first Italian yacht to enter the event. In 1985, he became manager of the committee which planned and put on the 1990 World Cup Italia.

In November 1991, FIAT chairman Gianni Agnelli made di Montezemolo president of Ferrari, which had been struggling since Enzo Ferrari's death; di Montezemolo made it his personal goal to win the Formula One World Constructors' Championship once again. Montezemolo quickly made changes at the Italian team, signing up Niki Lauda as consultant and promoting Claudio Lombardi to team manager role.[1] During the 1990s he resurrected the Ferrari road car business from heavy debts into solid profit. He also took on the presidency of Maserati when Ferrari acquired it in 1997, until 2005.

On May 27, 2004, Montezemolo became president of Italian business lobby Confindustria; days later, following the death of Umberto Agnelli on May 28, he was elected chairman of FIAT, Ferrari's mother company. Since 20 December 2004, he has also been president of the LUISS ("Libera Università Internazionale degli Studi Sociali Guido Carli", Italian for "Guido Carli Free International University for Social Studies"). He is vice-president of Bologna Football Club.

Di Montezemolo became involved in the controversy surrounding the 2005 United States Grand Prix when, on June 2, 2005, he condemned the FIA's requirement that a single set of tyres must last the full length of a race, blaming the circumstances which caused the disastrous race on the new rule rather than on Michelin, with whom Ferrari had formerly done business.[2]

Di Montezemolo has often been linked to a career in Italian politics, most recently the office of Prime Minister, but has always denied the rumours.[3]

On the 29th of July 2008, Di Montezemolo founded the Formula One Teams Association (FOTA) which he now presides. The Committee meet on a regular basis to discuss improvements to Formula One.