René Alexandre Arnoux (born July 4, 1948, in Grenoble) is a retired French racing driver who is a veteran of 12 Formula One seasons (1978 to 1989). In 2006 he raced in the inaugural season of the Grand Prix Masters formula for retired F1 drivers.

European Formula Two champion in 1977, René Arnoux graduated to Formula One in 1978, with the small French Martini team of Tico Martini. In an organisation with insufficient means to figure in the highest echelon of the sport, Arnoux was unable to demonstrate his abilities. Martini abandoned Formula One during the season, having run short of money. Arnoux found refuge at the end of the season at the Surtees team, but once again found himself in a team on the edge of failure. 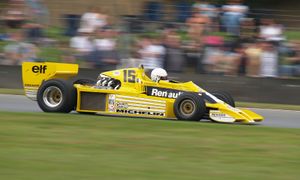 For the 1979 season, Arnoux joined the Renault team, which entered two cars for the first time since its debut in 1977. The team's only victory of the year was taken by Arnoux's teammate Jean-Pierre Jabouille at the French Grand Prix at the Dijon-Prenois circuit, but Arnoux took the headlines due to a fierce but good-natured wheel-banging battle with Gilles Villeneuve for second place.

In the 1980 season, Arnoux took his first two Formula One victories, but a lack of reliability prevented him from playing a part in the fight for the world title, although he took three pole positions. Arnoux's situation was complicated in 1981 by the arrival of Alain Prost at Renault. Inevitably their rivalry on track flared up off the track and relations between the two men deteriorated, dividing the small world of French sport. The conflict reached its peak at the 1982 French Grand Prix at Le Castellet. The drivers took the first one-two in Renault's history in Formula One, Arnoux finishing ahead of Prost. Prost was furious, considering that his teammate had not kept to the team orders agreed before the race, according to which he should have ceded the win to Prost, who was better placed in the championship. Arnoux replied that no orders had been given before the race and that he was free to drive his own race. He took one other win at the Italian Grand Prix at the end of the season. He was also lucky to walk away from a high speed crash after brake failure at the end of the long straight in the Dutch Grand Prix. 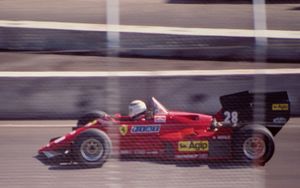 Arnoux started at the back of the field for the 1984 Dallas Grand Prix, but climbed to second by the finish.

The pairing of Prost and Arnoux having become unsustainable, Arnoux left Renault at the end of 1982 to join Scuderia Ferrari. With three victories, at the Canadian, German, and Dutch Grands Prix, he was in contention for the world title for much of the season, but was left behind by his rivals Prost and Nelson Piquet in the championship run in. After a less successful second season at Ferrari, during which his new teammate Michele Alboreto progressively took the initiative from him, Arnoux was suddenly dismissed after the first Grand Prix of the 1985 championship, the Brazilian Grand Prix.

Without a drive for the majority of the 1985 season, Arnoux made his return to Formula One in 1986 for the Ligier team, where he delivered several good performances. However, despite maintaining his motivation, Ligier were not competitive and Arnoux went through three seasons at the back of the grid before leaving Formula One after the 1989 season. Towards the end of his career Arnoux attracted some controversy; he was frequently accused of blocking faster cars in qualifying and when being lapped. He finished his career with 181 World Championship points.

René Arnoux has since started an indoor karting business called Kart'in, consisting of four tracks in France, two in the Parisian area, one in the suburbs of Lyons and one near Marseille. He also owns and manages two factories, frequently appears and drives in historical events on behalf of Renault and resides in Paris.

Arnoux was one of the drivers invited to take part in the Grand Prix Masters championship in 2006 and 2007, restricted to former Formula One drivers. In 2007 and 2008 he drives for the Renault H&C Classic Team, e.g. presents and drives Alain Prost's F1 car from 1983 at World Series By Renault events.