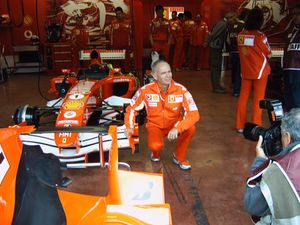 Rory Byrne with Michael Schumacher's car for the 2005 F1 Season.

Byrne was born in Pretoria.

He became interested in motor racing at Witwatersrand University in Johannesburg, South Africa, firstly as a competitor and later the technical aspects of the sport. After graduating in 1965 Byrne began working as a chemist but retained his fascination for racing until by the late 1960s he, with three friends Dave Collier, Ronny and Dougie Bennett, set up a company importing performance car parts called Auto Drag and Speed Den situated in Jules Street, Malvern, Johannesburg and later Voortrekker Road in Alberton. It was in this period that he first began to design racing cars, putting to use his mathematical knowledge even though he lacked formal engineering training. His first car, a Formula Ford racer, was competitive and finished well in the 1972 championship.

Following his success in 1972 Byrne relocated to England to pursue a career in racing car design. Purchasing an aging Royale Formula Ford car he began putting together the skills required improve the design and received a lucky break in 1973 when Royale founder Bob King decided to sell the team. The new owner needed an engineer to replace King, who had also been the cars designer, and offered the job to Rory Byrne, who spent the next four years designing a variety of cars for the Royale and its customers.

An introduction to Ted Toleman in 1977 offered the next opportunity for the thirty-three-year-old who was by now an established figure in British motor racing. Toleman was owner of a Formula 2 team and hired the South African as its designer. Several seasons of increasingly respectable results culminated in first and second place in the 1980 British Formula 2 championship. The team with Rory Byrne as its chief designer was now ready to make the jump into Formula One.

The first Byrne-designed car to appear at a grand prix was the Hart-powered TG181. Lacking the finances to reach the first three long-haul races Toleman entered Formula One at the San Marino Grand Prix. Two seasons passed before the fledgling team began to score points, but by the conclusion of the 1983 season Derek Warwick and Bruno Giacomelli had collected a very respectable 10 points - enough for the team to finish ninth in the constructors championship, and enough to earn Byrne credibility in the pit-lane. It was in the off-season of 1983/84 that Toleman signed Ayrton Senna - a move that almost made Byrne, Senna and the team first time winners at that year's Monaco Grand Prix.

The teams steady progress towards the front of the grid was given a boost in 1985 when the Benetton family announced plans to purchase Toleman. With more money, more resources and the most powerful engine available in the form of the inline-four turbocharged BMW, it took only until October 1986 for Gerhard Berger to secure the first win for himself, for the team and for a Byrne designed car at the Mexican Grand Prix.

Over the following five seasons Rory Byrne designed cars took four more race wins but the Benetton team was never in a position to truly challenge the likes of Ferrari, Williams and McLaren, with most victories being taken on days when the competition faltered.

After a brief spell with the abortive Reynard F1 project in 1991 Byrne returned to Benetton that fall[1]. What he found was a changed team now firmly under the control of Flavio Briatore and with hotshot Michael Schumacher installed as number one driver. Byrne's B193 car was a substantial technical advancement on the previous seasons car, incorporating a semi-automatic gearbox, four-wheel steering, active suspension and traction control. The car took a single win in the hands of Schumacher, but everything was now in place for a title challenge in 1994.

It was immediately obvious at the first race of 1994 that Byrne’s B194 chassis would be the car to beat. Critics suggested that the team's domination was more a result of an uncharacteristic slump by Williams star designer Adrian Newey and accusations of cheating dogged the team for the entire season. A late-season charge by Williams robbed Byrne of his first constructors title, but with his motto of "Evolution Not Revolution", everything seemed set for more success in 1995.

With the accusations of cheating behind them the Benetton team secured both titles before the season was finished, finally Byrne had what he wanted most. His car had won the Formula One constructors crown. With the hugely influential Schumacher leaving Benetton for Ferrari at the end of the season the team began to fragment. Perhaps sensing that his best achievement was behind him Byrne announced that he would retire in 1996.

By the conclusion of the 1996 season Michael Schumacher was being given free rein at Ferrari to build a team of engineers capable of returning the team to the top of the sport after years of underperforming. Benetton technical director Ross Brawn was hired and Ferrari approached Rory Byrne to replace the teams existing chief designer John Barnard who refused to re-locate to Italy. After long negotiations Byrne was lured from his retirement in Thailand back to Europe where he began building a design office at Ferrari's Maranello headquarters.

By 2000 Ferrari were finally ready to challenge for the title and continued to build momentum in the follow seasons. At the time of writing (January 2005) Byrne-designed Ferraris had secured 71 race victories, six consecutive constructors titles and five consecutive drivers titles for Michael Schumacher with a sustained level of dominance never before seen in the sport.

In 2004 Rory Byrne announced that he would be retiring from Formula One at the end of the 2006 season, handing over the role of chief designer to Aldo Costa, his assistant since 1998. On September 19, 2006, it was announced that Rory had extended his stay, as a consultant, at Ferrari for another two years which will lead him until early 2009.[2]