Ross Brawn (born November 23, 1954) is a British motorsport engineer. He has worked for a number of Formula One teams, latterly as the technical director of the championship-winning Benetton Formula and Scuderia Ferrari teams. He took a sabbatical from the sport in 2007, but returned to F1 for the 2008 season as Team Principal of Honda F1.[1]

Brawn was born in Manchester, England and attended Reading School in Reading, Berkshire, England. In the early 1970s, he was taken on as a trainee engineer by the United Kingdom Atomic Energy Authority at their Atomic Energy Research Establishment in Harwell, Oxfordshire, where he studied instrumentation.

Brawn, married to Jean, has 2 daughters, Helen and Amy. They live in Henley-on-Thames, although Brawn himself, understandably, spent much of his on-season time near the Ferrari factory in Maranello, Italy. In his spare time, he enjoys gardening, fishing, and listening to music. In 2006, Brawn received an honorary degree of Doctor of Engineering (DEng) from Brunel University for his services to motorsport.

His career in motorsport began in 1976, when he joined March Engineering in the town of Bicester as a milling machine operator. Soon thereafter he joined their Formula 3 racing team as a mechanic. Brawn was hired by Sir Frank Williams in 1978 as a machinist for the newly-formed Williams F1 team. He quickly moved up through the ranks, working in the R&D department and as an aerodynamicist in the team's wind tunnel. 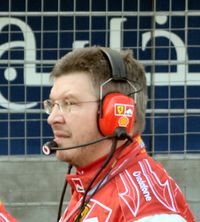 After brief stints with the now-defunct Haas Lola and Arrows F1 teams, Brawn's efforts caught the attention of Jaguar, which hired Brawn in 1989. He began work in their sports car racing division, bringing as much F1 technological experience as he could, and succeeded in designing the Jaguar XJR-14 cars which won the 1991 World Sportscar Championship.

Later in 1991, Brawn returned to F1 as technical director of the Benetton team, helping them win back-to-back World Drivers' Championships in 1994 and 1995 with Michael Schumacher, and to take the World Constructors' Championship in 1995.

Ross Brawn followed Schumacher to the Ferrari F1 team in 1996 (a year after Schumacher). After a few "rebuilding" years, he (as Ferrari technical director) helped Ferrari regain glory when the team won the Constructors' Championship in 1999, the first of six consecutive titles. The Brawn-guided Scuderia also powered Schumacher to five consecutive drivers' titles, from 2000 to 2004. Brawn's contributions to this unprecedented string of uninterrupted titles has led many to label him as a vital member of the Ferrari "dream team" along with Schumacher, team principal Jean Todt and chief designer Rory Byrne. In 2005, Ferrari never quite found form, and had to relinquish the title to Renault, while Schumacher passed the crown to Fernando Alonso. In 2006, Ferrari had a poor start to the season, but was clearly the fastest car by the end of that season.

On 26 October 2006 Ferrari announced that Brawn was to leave the team. It was believed that he would take a one year sabbatical, to allow other members of the Ferrari technical departments to advance within the team.

Although towards the end of 2007 many major media outlets were reporting that Brawn was to join the big spending Red Bull outfit as part of a package intended to attract double world champion Fernando Alonso, it was announced in November 2007 that he was to join the Honda F1 team as Technical Director.[2]

On 12 November 2007, Brawn was officially unveiled as the new team principal of Honda F1.[1] He started his work with the British based team on 26 November 2007.

With the withdrawal of Honda from F1 announced in late 2008 Brawn is effectively out of the sport unless a buyer can quickly be found, this is unfortunate for Brawn as he believes that the team has a 'race winning car' for 2009. [3]