Stefan Nils Edwin Johansson (born September 8, 1956) is a former Formula One driver from Sweden. Since leaving Formula One he has raced in a number of categories, including CART, various kinds of Sports car racing, and Grand Prix Masters.

Johansson's route to Formula One was via the British Formula 3 Championship, which he won in 1980. In F1 he participated in 103 grands prix, debuting on January 13, 1980 for the Shadow team when he was still an F3 regular, although these outings were unsuccessful and his fulltime F1 debut did not occur until 1983 after a spell in Formula 2. His links to the Spirit team and their Honda engines saw him re-enter F1 with them. In his Grand Prix career, Johansson achieved 12 podiums, and scored a total of 88 championship points. He joined Tyrrell in 1984 as a mid-season replacement for the injured Martin Brundle and then went on to Toleman for the end of season Grands Prix, finishing fourth in the Italian Grand Prix. A contract was signed with Toleman for 1985 but it fell through when Toleman failed to secure a tyre agreement. Instead Johansson started again with Tyrrell before being called up to Ferrari when René Arnoux was sacked. He led his second race with Ferrari in San Marino and would probably have won if he had not run out of fuel with two laps to go.

His role at Ferrari for the 1985 season was to back up Michele Alboreto's championship challenge, but in 1986 he often outpaced his Italian team-mate. For 1987 he moved to McLaren as Alain Prost's number two. Further podium finishes followed, but the team always intended to replace him with Ayrton Senna in 1988. Despite 11 podiums in 3 seasons, Stefan was still winless, and was not wanted by a top team.

He joined Ligier, ironically alongside Arnoux, but the car was totally uncompetitive, scoring no points and not always qualifying, even against teams with much smaller budgets such as AGS and Rial. Better was to follow in 1989 as he was signed to lead the new Onyx team. Their car was temperamental and didn't always qualify, but Stefan finished third in Portugal for his last (and the team's only) podium finish. He fell out with new team owner Peter Monteverdi in early 1990 and was duly sacked, making further appearances for AGS and Footwork in 1991.

He remains the driver with the most F1 podium finishes without ever winning a race.

For 1992 he moved over to CART Championship Car, winning the Rookie of the Year title with two third places, ahead of Belgium's Eric Bachelart. His first pole came at Portland the next year, but as in Formula 1 he never won a race. From 1992 to 1996, he started 73 races and had his best season overall in 1994, finishing in 11th. During this time, he competed in the 1993-1995 Indianapolis 500. At the 1996 Molson Indy Toronto race, he was involved in an accident that claimed the life of fellow driver Jeff Krosnoff. After making wheel to wheel contact, Jeff's car hit the barriers and also a tree and lamp post that was too close to the track. Krosnoff died instantly of the injuries sustained from hitting the lamp post.

Before his Formula One career Stefan had participated in sports car races such as 24 Hours of Le Mans, and had won two World Sportscar Championship races in the 1980s (the Mugello round in 1983, driving a Joest Racing Porsche 956 with Bob Wollek, and the 1988 Spa Francorchamps race in a Sauber C9 with Mauro Baldi). After retiring from CART at the end of the 1996 season he returned to this type of racing. During 1997 he recorded two major race wins, at the 12 Hours of Sebring driving a Ferrari 333 SP and at Le Mans where he drove a Joest Porsche. 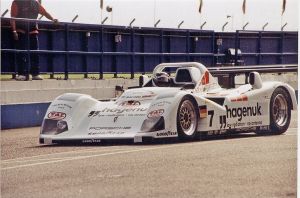 Johansson driving a Joest Porsche WSC-95 at Donington Park in 1997.

In 1997 Johansson founded a successful Indy Lights team running Fredrik Larsson and Jeff Ward; in 1998 its drivers were Guy Smith and Luiz Garcia, Jr.; for 1999 the seats went to Scott Dixon and Ben Collins.

During 1998 & 1999 Stefan raced for various sports car teams (like the unreliable Audi R8C Coupé at Le Mans) but in 2000 he started Johansson-Matthews racing with an American businessman called Jim Matthews. They competed in the American Le Mans Series using a Reynard 2KQ prototype. Unfortunately this wasn't a successful vehicle in its original form (though it was later developed into various other successful cars including the Zytek that he later raced) and the partnership dissolved.

In 2001 Stefan was lucky enough to be able to campaign an Audi R8 prototype with backing from Gulf Oil and the assistance of Mike Earle's Arena team. That year he raced in the European Le Mans Series, the American Le Mans Series and at Le Mans itself. His co-drivers were Guy Smith and Patrick Lemarie. At Le Mans Smith was replaced by Tom Coronel.

2002 saw Stefan back in an Audi R8 but this time one run by the Miami based Champion Racing team. His co-driver was ex Formula One driver Johnny Herbert and they competed in the American Le Mans Series.

For 2003, he returned to CART as a team owner, running American Spirit Team Johansson with Jimmy Vasser and Ryan Hunter-Reay as drivers. This was one of many new teams for the 2003 CART season; ironically, Bachelart's Mi-Jack Conquest Racing team was another. The team was under-funded, and although Hunter-Reay scored a fluke win in the wet conditions at Australia, it folded at the end of the season.

After only competing in a couple of celebrity races and occasional outings in the works Zytek in 2004 Stefan returned to full time racing in 2005 driving the Chip Ganassi run New Century Mortgage sponsored Lexus Riley Daytona Prototype in the American Grand-Am Rolex Sports Car Series. With co-driver Cort Wagner he scored his best finish, a 2nd place, at Mont Tremblant in Canada, they finished the year in 5th place in the championship.

In 2006 as well as the Grand Prix Masters series, Stefan has made occasional appearances in Grand-Am for the Cheever and CITGO teams, and has continued an association with the works Zytek team in the Le Mans Series.

2007 saw Johansson competing in a Highcroft Racing Courage-Acura in the LMP2 class of the American Le Mans Series, sharing with David Brabham. He was due to race a Zytek at Le Mans in 2007, but the team could not rebuild the car in time after a test-day accident, and Johansson made a last minute deal to drive a works Courage.

Johansson took part in the inaugural Speedcar Series in 2008, where luck once again deserted him - as the victim of a lot of other drivers' accidents. For 2008 Johansson does not have a full-time sports car drive, with some outings planned in the Highcroft Acura ARX-01 in the ALMS and a place with the Epsilon Euskadi team at Le Mans.

Outside the cockpit, Stefan has a number of business ventures (including managing several successful drivers such as Scott Dixon) and is a keen artist - he is particularly known for his watch designs.