Tifosi is an Italian word to describe a group of fans. The term for a single male fan is Tifoso. The female singular version is Tifosa, and the plural term for an all female group is Tifose.

The word is mainly used to describe fans of clubs in football. Apart from the many local fan clubs in Italy whose main role is (for example) to provide a meeting place for fans and friends and organize away trips, since the late 1960s many Italian fans rely on organized stadium groups known as Ultras. The main goal is to choreograph fan support with flags, banners, coloured smoke screens, flares, drums, and chanting in unison. For most teams city rivalries, colours, coat of arms, symbols, and the overall iconography have roots in the Middle Ages and early Renaissance. As the chosen names of most organized groups, the youth of most members, and the late 60s origins may suggest, the social trend is best understood as part of the popular culture that centres around the year 1968. 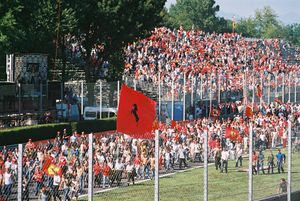 The Tifosi at the 2003 Italian Grand Prix, Monza

It has become common to use the word Tifosi to refer to the supporters of Scuderia Ferrari in Formula One. Italian motor racing fans are well-known for their love of Ferrari, whereas most other supporters tend to support local drivers rather than teams.

The Tifosi provide Formula One with some of its most iconic images, as a sea of red fills the grandstands at the Italian Grand Prix. A similar sight could be observed in former years during the San Marino race.

One of the most common Tifosi sights is the display of an enormous Ferrari flag in the grandstands during Formula 1 weekends at every race circuit, with especially large contingents showing up in Ferrari livery at home and nearby European tracks.

The recent increase in their ranks can be directly traced to the rise of Michael Schumacher, who drove the lead Ferrari from 1996 to 2006, and in the process broke nearly every record ever set in the sport.

The word is commonly used to describe fans along the roadside at professional road cycling races in Italy such as Tirreno-Adriatico, Milan-San Remo, the Giro d'Italia, and the Giro di Lombardia.