Willy Mairesse (October 1, 1928 - September 9, 1969) was a Formula One and sports car driver from Belgium. He participated in 13 World Championship Grands Prix, debuting on June 19, 1960. He achieved 1 podium, and scored a total of 7 championship points. He committed suicide in a hotel room in Ostend after injury at the 1968 24 Hours of Le Mans forced an end to his career.

Peter Revson once described the intensity of Mairesse before a race at Spa, Belgium. Revson looked into his car and saw Mairesse's furrowed face, beetled brows, and eyes which were almost tilted and their color changed. It was almost like looking at the devil.[1]

Mairesse secured third place in the Grand Prix of Monza in June 1959. Driving a Ferrari, he placed behind Alfonso Thiele and Carlo Mario Abate, both also in Ferraris.[2] Mairesse and Mike Parkes of England finished second to Phil Hill and Olivier Gendebien at the 1961 24 Hours of Le Mans. Driving a Ferrari, Mairesse and Parkes also eclipsed the previous Le Mans record, covering 2,758.66 miles.[3] In the 1963 12 Hours of Sebring Mairesse and Nino Vacarella placed second after Ludovico Scarfiotti and John Surtees. Both teams drove Ferraris.[4] Surtees and Mairesse led for the first 14 hours of the 1963 24 Hours of Le Mans. Scarfiotti and Lorenzo Bandini captured won on the French circuit where one driver had a fatal accident. Mairesse and Surtees retired after a motor fire.[5] A young German Red Cross worker was killed in August 1963 when the wheel of a Ferrari driven by Mairesse came off as his car overturned. Guenther Schneider, 19, was hit by a flying wheel during the running of the Grand Prix of Germany at Adenau. [6] Mairesse was triumphant in the 1964 Grand Prix of Angola, run at Luanda. His average speed was 80.78 miles per hour.[7] Mairesse piloted a Ferrari 250 LM to first place in the Grand Prix of Spa in May 1965. He completed the race in 2 hours, 29 minutes, and 45.7 seconds. He averaged 126.29 seconds.[8] Mairesse and Jean Beurlys of France finished third at the 1965 24 Hours of Le Mans. Masten Gregory and Jochen Rindt captured the 1965 24 Hours of Le Mans. Mairesse and Beurlys finished third in a Ferrari.[9] In April 1966 Surtees and Parkes won the 1,000 kilometer Monza Auto Race. Mairesse and Herbert Mueller of Switzerland came in third in a Ford sports car, two laps behind.[10] In May Mairesse and Mueller drove to victory in the Targa Florio, driving a Porsche Carrera 6. Rain caused considerable attrition as only thirteen of seventy starters finished the race.[11] Mairesse and Beurlys again drove a Ferrari to third place in the 1967 24 Hours of Le Mans. This event was won by the American team of Dan Gurney and A.J. Foyt.[12]

Mairesse was third in the Grand Prix of Europe, 1960 Italian Grand Prix. This was the penultimate race of the 1960 Formula One World Championship. Run at the Autodromo Nazionale Monza, Phil Hill was victorious with Richie Ginther second, and Mairesse next, a lap down.[13] Mairesse qualified fifth for the 1962 Belgian Grand Prix at Spa, Belgium. The pole was won by Graham Hill in a BRM.[14] During the event Mairesse and the Lotus of Trevor Taylor dueled for more than an hour, passing and repassing a number of times each lap. Mairesse was cheered heartily by an enthusiastic partisan crowd. The two cars came together at more than 100 miles per hour in the long, sweeping, righthand Blonchimont Turn. Mairesse car went off to the left, careening into a hillside behind a ditch, and caught fire after flipping over. He was thrown out of his Ferrari and his shoes and the legs of his trousers were torn off. He was conscious, despite numerous scrapes, cuts, and burns. Mairesse was loaded into an ambulance and transported to a hospital, where he was reported to be in good spirits and without any serious injuries. Taylor and Mairesse made contact earlier in the season at the Grand Prix of Brussels.[15] In a race in which only twelve of twenty-one starters finished, Mairesse came in fourth in the 1962 Italian Grand Prix. He was only a car length ahead of Giancarlo Baghetti.[16]

Out of Formula One in 1963, Phil Hill predicted a rough future for the Ferrari team. He said there was too much competition between Mairesse and Surtees. Specifically he commented they will harry each other so much that they will force each other to make mistakes.[17] Mairesse car crashed during the 1963 German Grand Prix. The Ferrari turned over multiple times after swerving off the track. He was rushed to the hospital with a broken arm. His teammate, Surtees, was triumphant, with Jim Clark second in a Lotus.[18] 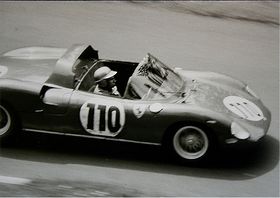 Mairesse at the Nürburgring in 1963.